Yesterday was a lovely warm summer day—perfect to check out the Museum of Modern Art's Abby Aldrich Rockefeller Sculpture Garden. But as I was about to push open the door, I noticed a sign warning visitors that there were "live bees" and a beehive in the central tree area of the garden. This was not an artist's metaphor:

Katie talks about the @themuseumofmodernart bees

It turned out to be part of Pierre Huyghe's sculpture, Untilled, which the museum recently acquired. There is a sculpture of a reclining female, and, the MoMA explains, atop her head is a "live colony of a gentle breed of bees"

This tour de force of Huyghe’s oeuvre reflects his concern with living systems, and the timing of the sculpture’s display is determined by the natural cycle of the bee colony, which is most active during the summer months. Operating according to its own natural logic, the colony introduces a dynamic community into the Sculpture Garden’s summer installation.

The living beehive serves as the nude’s head, but also, by extension, her brain. The collective thought processes of bees—their “hive mentality”—have long been studied in relation to human political and social organization. Untilled (Liegender Frauenakt) explores these affinities and emphasizes the ancient, symbiotic relationship between humans and honeybees, which, in building their hive, collaborate in the creation of the sculpture.

When Untilled was shown at LACMA, it was behind a rope. There's no rope here and you can get pretty close to the sculpture (with bees buzzing by), but there is a museum staffer monitoring. Some boys who were enraptured by the hive went behind the sculpture, by the pond, only to be asked to step away. 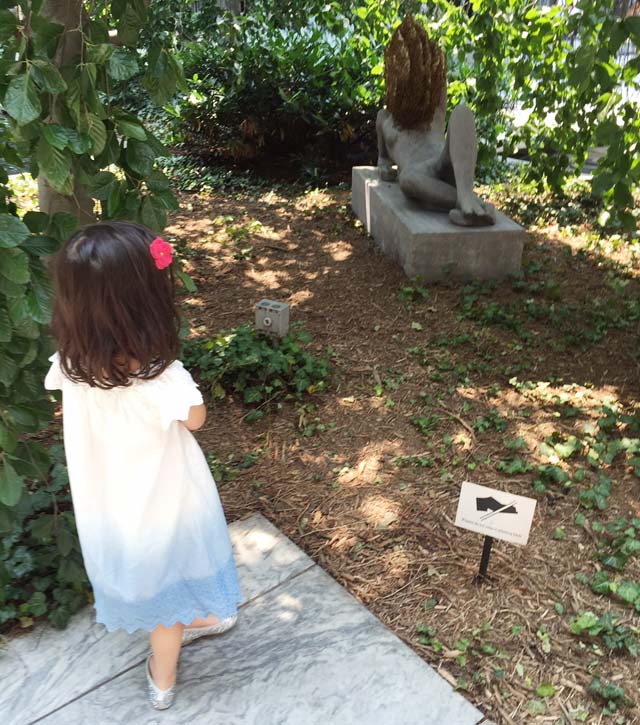 The museum noted that the bees, who hail from New England, were installed last month by beekeeper Andrew Cote, "The hive continues to grow and the population of the colony could reach 75,000, as the bees nourish themselves with pollen and nectar from Central Park and other nearby green spaces. Andrew monitors them twice daily and they are thriving, having made a smooth transition from rural New England to Midtown Manhattan."

So I guess my daughter's estimate of how many bees are there now is a little too generous:

Part 2 of Katie on "Untilled"

I loved the sculpture—it's unnerving but also exciting to see nature play such a big role in art. And the concept of trying to break down "hive mentality" is very apt in today's world.

Untilled will be in the garden until August 15, 2015. This is also the MoMA's first piece involving live animals. FYI: Huyghe is also the creative mind behind this summer's divisive rooftop installation at the Metropolitan Museum of Art (one critic called it "off-putting and unappealing").

#beehive
#bees
#moma
#museum of modern art
#Pierre Huyghe
#sculpture
#original
Do you know the scoop? Comment below or Send us a Tip