Yeah That's It, Kick Off Your Sandals And Rest Your Bare Feet On The Subway Seat

As part of our ongoing mission to shame commuters who violate basic standards of subway etiquette and human decency, we present this photo of a guy just stone cold chillin on the D train with his bare feet propped up on the seats. Yeah, that's the stuff. You get nice and comfortable there, friendo.

His conduct was documented last night by a self-proclaimed "subway citizen police" officer who prefers to remain anonymous. Our policeman reports, "It certainly wasn't rush hour, but every seat was taken and I was standing a few stops before sitting and snapping this pic. At least he took off his sandals before he blacked out."

Putting your feet up on the subway seats is a violation of the MTA code of conduct, and the NYPD is known to issue summonses to transgressors. But taking off your shoes or sandals seems even more inconsiderate—do we really need your potentially smelly feet shoved in our faces or making direct contact with the seat? And really, Shoeless Joe, you should be more careful—do you have any idea what ELSE has touched that seat?

The photo sparked a heated debate here at Gothamist HQ, with some bleeding-heart barefoot sympathizers insisting that there's nothing wrong at all with rubbing your bare feet all over the subway. In-house defender of the common man Christopher Robbins has this perspective:

First, this kid isn't "rubbing his feet all over the subway." Nor is he mashing his corns onto the handrail or furiously using a pumice stone like a cheese grater. He's sleeping the innocent sleep of the overwhelmed. If it's not rush hour, why deny him the simple, harmless pleasure of removing one of his smallest burdens. I'd wager that his feet are cleaner than most people's hands on that subway car.

I don't want to live in a city that can't let a sleeping barefoot man lie. 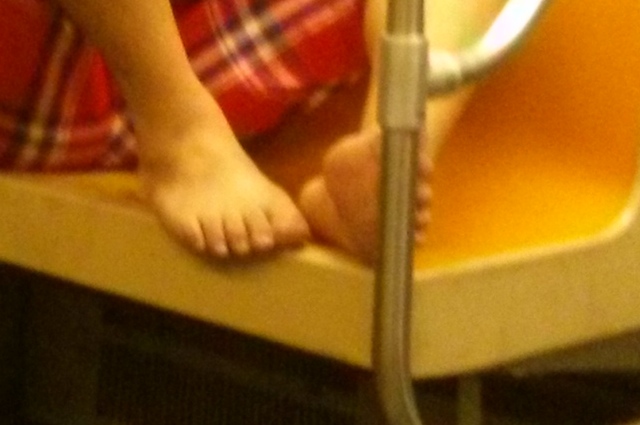 Take a long hard look at this close-up and ask yourself if you're comfortable with Robbins's dystopian vision for a barefoot New York City.