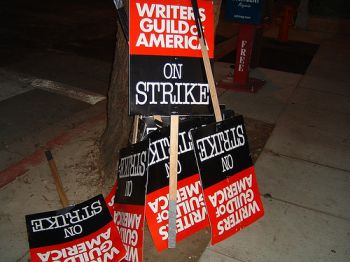 Last week there were rumblings of the writers' strike coming to an end, over the weekend it was pretty much confirmed, and since then the TV-nation has been waiting with bated breath. Until last night, that is, when word came in that the WGA (trying to steal Obama's thunder?) announced that the strike has officially come to an end. Fin! In the last of what has seemed like an endless amount of WGA press releases we've received over the past few months, the following was stated:

The membership of the Writers Guild of America, West (WGAW) and the Writers Guild of America, East (WGAE) today voted overwhelmingly in favor of lifting the restraining order and ending their 100-day strike that began on Nov. 5. 3,775 writers turned out in Los Angeles and New York to cast ballots or fax in proxies, with 92.5% voting in favor of ending the work stoppage.

In a letter from the WGA West and East Coast Presidents, it was noted that "Writing can resume immediately. If you were employed when the strike began, you should plan to report to work on Wednesday. With the establishment of the WGA jurisdiction over new media and residual formulas based on distributor’s gross revenue (among other gains) we are confident that the results are a significant achievement not only for ourselves but the entire creative community, now and in the future." But when will your "stories" be back on the air? TV Guide has a continuously updated list tracking most shows and how many new episodes will be salvaged for the year (The NY Times also tunes in); some of the bigger ones: