Wowza, Is This The Most Instagrammable Subway Station In NYC? Train delayed? No problem, just feast your eyes upon this sparkling new glass mosaic and don't worry about getting to work on time. What's that, you're smelling a chemical of some sort while riding the rails? Inhale deep enough and maybe the fumes will enhance your subway art experience. Part of the station ceiling fell on your head? Shhhhh, just gaze at the flower art, it's all gonna be alright. Trapped on the F train and trying to claw your way out? Relax, wipe that condensation from your tin coffin and try to spot the art just outside. It may be the last thing you ever see.

But seriously folks, these flowers really are pretty.

The MTA recently reopened the 28th Street Station (Lexington Avenue line, where the 6 and 4 trains stop at various times), which has been closed since July of 2018 for renovations. Upon reopening, word seems to have spread fast that this station is now a straight up stunner. Thanks to Nancy Blum's "Roaming Underfoot," it has become the most Instagrammable station in the entire system, probably. Much respect to Molly Ringwald for not perfectly posing in front of the artwork and just being like, "Eh fuck it, this'll do":

According to the MTA Arts & Design, "Blum’s intent was to capture some of the magic of the nearby park, regarded as an urban sanctuary, and to enhance the station environment for transit riders." Her glass mosaic murals depict "seven flowering plants that are sourced from the Madison Square Park Conservancy’s Perennial Collection... the flowers include Red Buds, Magnolias, Hellebores, Witch Hazel, Daffodils, Hydrangea and Camellia," which were all "chosen as representation of plant species that withstand changing climate conditions of the city."

While a portion of the MTA Capital Plan's funds are used "to commission permanent works of art," and their report notes around $32 million was spent on this station's renovations, it's unclear how much of that went towards beautification specifically (MTA reps have not returned our request for more information on this). Structural and safety improvements were also made to the station, this includes "new lighting, guardrails and railings, repaired stairways, replaced and repaired concrete platform floors, new tactile warning strips and new technological features like customer information screens, countdown clocks, Help Point intercoms and security cameras." There are also sleek new benches, and... "leaning bars." 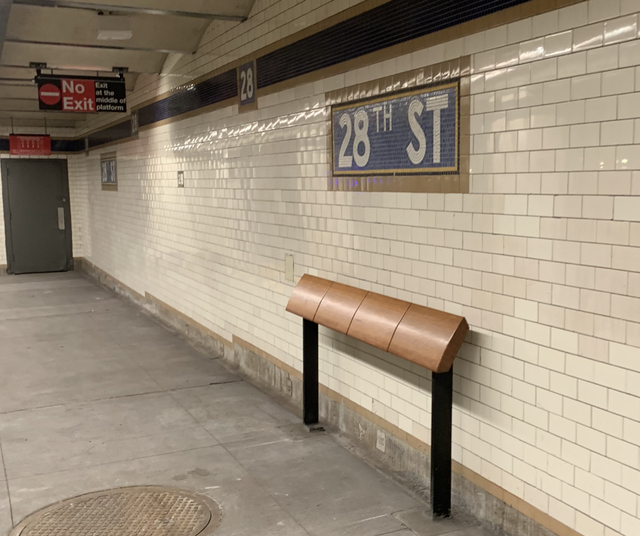 On a recent visit to the station, it appeared as though the uptown side was still undergoing some work, so note that these photos are from the downtown side—keep that in mind should you want to get your 'gram on 🙄At the very least, your friends who don't live in NYC will think we live in a beautiful wonderland, and commute to work through an elegant transit system that looks like this:

Riding the MTA would be waaay less stressful if all of the stations looked like THIS 🌸 This is the new downtown side of the 6 train at the 28th street stop that was recently renovated and it’s gorgeous! I also love the art from the recently added 72nd street stop of the Q line and I love the hats at the 23rd street RW station. - What’s your favorite subway station? Are there any particularly cool ones I should check out? Comment them down below! 📸 @norepeatsorhesitations

Me and my baby just waiting on spring to arrive...meanwhile, it’s supposed to snow here today 😅❄️☃️🌨🥶#nycxbgg

#28th street
#MTA
#subway
#subway art
#we the commuters
Do you know the scoop? Comment below or Send us a Tip