World Cup Day 15: Like Being Handcuffed And Thrown In Guantanamo

Germany 1, United States of America 0 ( HIGHLIGHTS) The Yanks were dominated throughout the entire 90 minutes, conceding more possession than they ever had in a World Cup match. A Thomas Mueller strike in the 55th minute would be more than enough to seal the victory for the Germans - for a more thorough recap, check out our match report, and stay tuned for Charles Boehm’s report from camp later in the day. The result, of course, didn’t keep the US from advancing, as they went through to the round of 16 after Portugal’s victory over Ghana.

Portugal 2, Ghana 1 (HIGHLIGHTS) A 30th minute own goal put Portugal ahead early, easing the concerns of many US fans who knew that a Ghana victory (when combined with a US loss) would drastically reduce their chances of advancing. Ghana equalized in the 55th minute, once again setting the stage for a potential US exit. 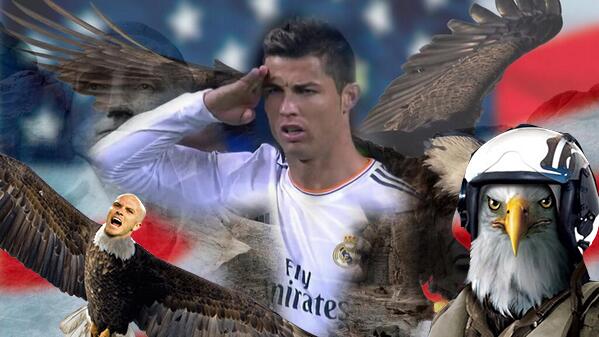 In the 80th minute, however, international megastar and noted underwear model Cristiano Ronaldo casually tossed a saddle over his giant bald eagle, picked up his machine gun and swooped into the penalty area, hammering home the game-winner and booking the US’ spot in the round of 16.

Belgium 1, South Korea 0 (HIGHLIGHTS) Belgium cruised to a relatively easy and completely expected victory over the Koreans, finishing the group stage unbeaten and setting up a round of 16 matchup with the United States. The Belgians played an entire half down a man after Steven Defour was sent off for a two-footed challenge, but nevertheless found the game-winner some 10 minutes from time. South Korea's result means that none of the four Asian teams at the tournament (South Korea, Japan, Australia, and Iran) managed to register a single win in the group stage.

Algeria 1, Russia 1 (HIGHLIGHTS) Algeria is headed the knockout phase of the World Cup for the first time in its history after a second half equalizer drew them even with Russia. Russia were dominant for long stretches after taking an early 6th minute lead on an Alexander Kokorin header, but were left wanting when Algeria’s Islam Slimani’s driven header equalized the match in the 60th minute.

The Play To Watch

Cristiano Ronaldo’s game-winner for Portugal. Without it, the US were on the brink of elimination, much to the chagrin of many of you who’ve been enjoying your extended lunch breaks and unplanned sick leave.

And here's Algeria's equalizer, including someone in the stands trying to shine a laser pointer in the eyes of the Russian goalkeeper:

Real talk: there aren’t any matches today. Take a break. You’ve earned it: acting like you care about soccer is hard work. The round of 16 starts on Saturday, of course, so let’s take a look at those match-ups instead.

Brazil vs. Chile (12PM ET, ESPN) In what promises to be one of the more entertaining matches of the knockout phase’s opening round, the host nation faces off against surprising South American side Chile, who’ve been a blast to watch all tournament. The Chileans were certainly underdogs to advance yet managed somehow to emerge from a group that included defending champion Spain and a fearsome Netherlands side. Brazil got off to a tepid start in group play but seemed to hit their stride in their final match against Cameroon, only adding to the buzz surrounding the Seleção.

Colombia vs Uruguay (4PM ET, ESPN) Uruguay will be playing their first match without Luis Suarez, who was suspended for nine matches and four months Thursday for his "bite heard around the world". Colombia remain without the services of their star striker, Radamel Falcao, but don't seem to be suffering, having cruised through the group stage with three wins and scoring nine goals in the process. Uruguay, on the other hand, struggled mightily without Suarez in their group stage opener, losing to Costa Rica.

Can Colombia continue its perfect run? Can Uruguay cope with the loss of its best player? Could Luis Suarez maybe just stop eating people? Two of these questions will be answered this weekend.

Need a spot to watch the games? Check out our venue guides for NYC, DC, LA, and San Francisco.

What Else Is Going On?

Kyle Beckerman has been among the US’ strongest performers in Brazil. He is a national treasure. So obviously, let’s look at his engagement photos and talk about how ridiculous they are.

In what is in no way hyperbole, Argentina soccer legend Diego Maradona rallied against the Suarez ban: "The Fifa sanction is shameful, they have no sensitivity towards the fans, they might as well handcuff him and throw him in Guantanamo." Then again, even the player Suarez bit feels it's "excessive".

Perhaps you've seen "Teddy Goalsevelt" during the USA games, the American fan dressed as our 26th President? CBS6 has the story of how he came to be.

The New York Red Bulls return to action tonight, and have apparently put up signage reminding folks not to pull a Suarez:

For players and supporters welfare, we added some new signs at RBA. See you tonight! #RunWithUs #NoBiting #Suarez pic.twitter.com/CXbGxbG7Ej

Finally, here's the Wu-Tang Clan produced, World Cup-inspired merchandise your wardrobe has been waiting for.

#luis suarez
#soccer
#world cup
#world cup 2014
#worldcupist
Do you know the scoop? Comment below or Send us a Tip