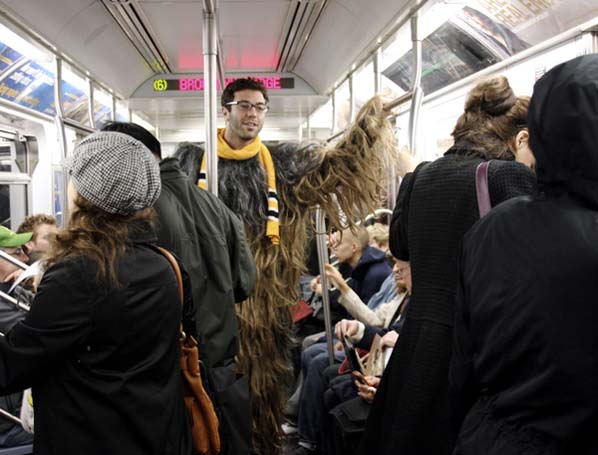 With straphangers desperately seeking another Patrick Moberg and Camille Hayton story to warm their commuting hearts (don't deny it), the boys at Zoomdoggle are stepping in to force their own missed connections. Their solution to finding love in the big city boils down to a Wookie suit, pensive stares and an occasional smile.

Sadly, the efforts of the Wookie, ex-MTV Road Ruler/writer/photographer Jake Bronstein, led nowhere -- as not one person he encountered in the suit was intrigued enough to leave a Craigslist note. New York can be heartless at times, but here are some other things he learned that day:

They never seem to unleash a barrage of bullets when it's actually warranted, do they? But come on ladies, give the big Wookie a chance; you wouldn't want him to face his family on Life Day without a date.

#chewbacca
#jake bronstein
#missed connection
#single
#wookie
Do you know the scoop? Comment below or Send us a Tip