Woodstock 50, the official three-day anniversary event taking place at Watkins Glen in the Finger Lakes this summer—no, not the one with TED-style talks—has announced their full-lineup. As was expected, headliners for the anniversary event—no, not the one taking place at the site of the original festival, that's the other one—will include Jay-Z, The Killers, Santana, Miley Cyrus, Chance The Rapper, Robert Plant, Dead & Co., and lots more. 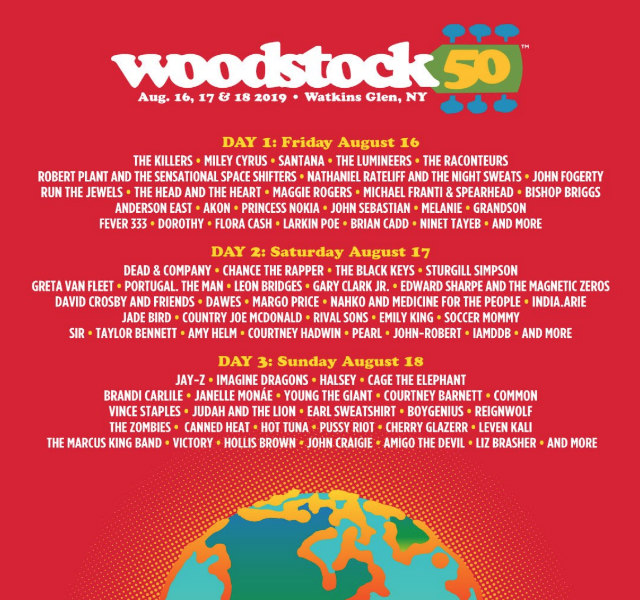 In addition to Santana (who apparently will be pulling double duty by playing both fests), a few other artists who played the original festival back in 1969 will be there as well: John Fogerty, John Sebastian, Country Joe McDonald, Canned Heat, Hot Tuna and David Crosby (and Friends). Otherwise, it's all newer artists from across the rock (The Black Keys, The Raconteurs, Gary Clark Jr.), pop (Janelle Monae, Imagine Dragons, Halsey), and rap (Run The Jewels, Vince Staples, Common, Earl Sweatshirt) spectrums. There's a pinch of great indierock artists (Courtney Barnett, Soccer Mommy, Boygenius), a dab of country (Anderson East, Sturgill Simpson, Margo Price, Brandi Carlile), and also The Zombies. The Zombies fucking rule.

According to Rolling Stone, Fogerty played four Creedence Clearwater River classics (including "Have You Ever Seen The Rain?," "Who'll Stop The Rain?," "Bad Moon Rising" and "Fortunate Son") and explained why he wanted to play the fest 50 years later: "I don’t expect it to be the same,” he said. “The mood in the country is different, similar in many respects, but different. I’m very glad that I’m able to be here 50 years later celebrating it. I hope to have a great time. I’m going to be playing most of the same songs that I played then. I’ve had a few more songs since then. But I think culturally, for me, it resonates because it was such a watershed moment in the time of my generation."

Woodstock 50, which will take place from August 16th to 18th at Watkins Glen International speedway in Watkins Glen, NY, is being billed as the only authorized commemoration of the 1969 festival. Tickets for Woodstock 50 go on sale April 22nd—you can get more information on the festival’s website. The Bethel Woods Music & Culture Festival, which is the unofficial Woodstock anniversary fest, will take place August 15th through the 18th at the original site in the Catskills.

#concerts
#musical festival
#watkins glen
#woodstock
#woodstock 50
#woodstock anniversary
Do you know the scoop? Comment below or Send us a Tip