Woman Behind The West Village Weather Bear Has Died

When Norma Langworthy died on January 28 at 92, not only did the New York theater scene lose a loving patron but the Village may have lost one of its many curiosities. Because, as Jeremiah's Vanishing New York notes, beyond being an accomplished philanthropist and producer, Langworthy was also the woman behind the always appropriately dressed Weatherman Paddington Bear in the window of West 11th Street townhouse that replaced the one the Weathermen famously blew up in 1970 (it was an accident!). 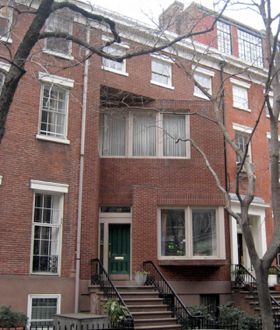 For decades Langworthy had made sure that the Paddington Bear in her modern townhouse's angled first-floor window was always properly dressed for whatever weather nature provided (as well as for major holidays). Raincoats, Santa hats, he had them all. It was a strange and quirky sight that brought a bit of joy to passersby and neighbors alike. Now Langworthy is gone, survived by children and grandchildren, and Paddington Bear is dressed in black. Hopefully, someone will keep the tradition alive—there aren't many homes in New York that actually invite pedestrians to look inside their windows.

You can learn more about Norma Langworthy—she helped produce everything from The Road to Mecca to The Lonesome West—on the Roundabout website. And if you want to learn more about the Weathermen and the building they accidentally blew up, the internet is full of resources. Probably easiest to start here. Then maybe tonight you can watch the excellent 2002 documentary on the group, The Weather Underground—it is free on Hulu.