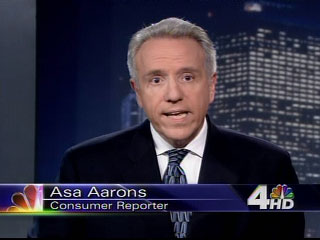 After almost 15 years on the air, consumer reporter Asa Aarons was let go Friday by WNBC in the latest of the NBC 2.0 cuts. In an e-mail to TV Spy, Aarons said the parting was “amicable” and that he was told that "with NBC 2.0 budget cuts there is no longer room for a full time consumer reporter."

Aarons told the Daily News, "It struck me as simply a numbers game." He also mentioned that WNBC’s senior vice president of news, Dan Forman, was near tears when he informed Aarons of the decision, which may imply the decision was made by number crunchers elsewhere.

The NBC 2.0 cuts, which locally claimed Joe Avellar, Dr. Max Gomez and Jane Hanson last November, are part of a plan to make the company more profitable and have included cuts at other NBC properties and an increase in cheaper programs, such as reality shows, on NBC owned networks.

A spokesperson for the station told the Daily News, "The decision was not to renew his contract. It was a tough decision for us. We have nothing but respect for Asa. He's been with us for 14 years. We wish him the best of luck." They also said that his duties would be absorbed by the rest of the news team.

Given the lackluster ratings of what was the main venue for his reports, the 5:30 p.m. features and lifestyle newscast News 4 You, we aren’t totally surprised by the decision. However, Aarons’ “Ask Asa” reports were one of the things the station was know for and he had been with the station for a decade and a half. Although in light of the elimination of the long running and very well known “Live at Five” brand along with the 5 p.m. newscast last month, it is less of a shocker.

He will be paid by the station until May when his current contract expires, so that may likely restrict him from reporting on air in New York, but he still has his Daily News column “Ask Asa.” Aarons is smart - he actually owns the “Ask Asa” brand, so if he does turn up elsewhere on New York television the station that snags him will get an established brand.