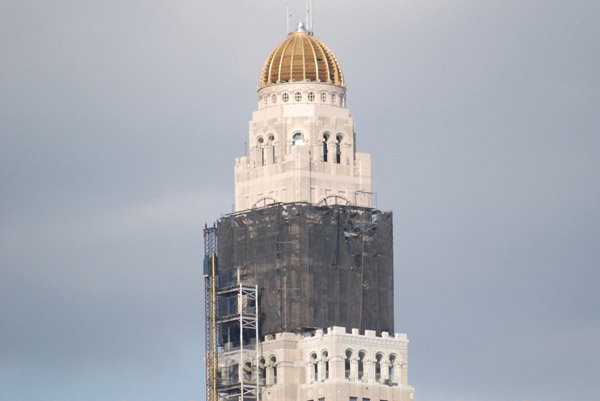 At long last, after more than a year suffering behind black netting, the four-faced clock and gilded dome of the Williamsburgh Savings Bank building are back in (almost) full view. But don't rely on it to tell time. The hands don't move yet!

The NY Times has a write-up of the restored clock, which the building's owner, the Dermot Company, began renovating in 2006. Certainly, the four-faced clock of Brooklyn's tallest is now a lot cleaner. Known for faces that sometimes kept different times or no time at all (that was pretty depressing), the tower, now the once semi-controversial condominium building known as One Hanson Place, is likely to be better synchronized, representatives at Dermot told the Times' Andy Newman.

Not everyone's happy with the sanitized version.

Robert Goldstrom, an artist who has painted the clock’s likeness more than 80 times (15 since the netting went up), said he could already tell that the clock was a lot cleaner. But he was not sure that that was an entirely good thing.

“It’s like the Sistine Chapel,” he said. “Some people got very upset when it was cleaned. You’ve got to get used to it not looking sooty. I’m sure I will miss the subtler, dimmer clock tower.”

Completed in 1875, the building initially was a four-story limestone, sandstone and marble structure designed in a Classical Revival style, according to the Encyclopedia of NYC. In 1926, the bank bought land and sought to design a skyscraper, which was built between 1927 and 1929. That's when the clock, which was the largest in the world at the time, and gilded dome, among other details, were added. The 512-foot tower is unusual because it combines Romanesque and Byzantine architectural elements. It became central to the Atlantic Yards debate over the height of Miss Brooklyn, which was poised to eclipse Brooklyn's Big Ben, but apparently was shortened to 511 feet (although residents say Gehry's building still will block the clock tower).

Alas, we still regret the day that the observation decks were closed to the public.