Williamsburg: The NY Times Was ON IT Back In 1998

In November of 1998, the NY Times delved into the up and coming Williamsburg art scene, in a way that's currently happening with the Bushwick/Ridgewood art scene. You can read the entire spread (their weekend arts & leisure cover story) right here. Some highlights: 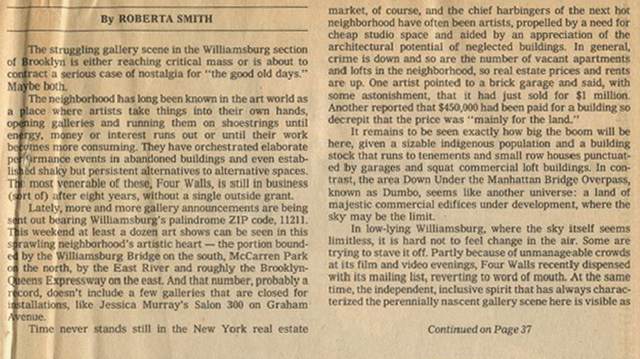 Of course, by this point the neighborhood was not really a secret, and it was long past the days that Officer Frank Serpico was shot on Driggs Avenue—in fact, there were plenty of press clippings from the late '80s and early '90s touting the art scene.

For more Williamsburg nostalgia: A look inside The Ship's Mast bar, which closed in 1993; RIP Kokie's; 14 photos of Williamsburg from 1905 to 1954; and 28 more old photos that were recently released by the Municipal Archives.