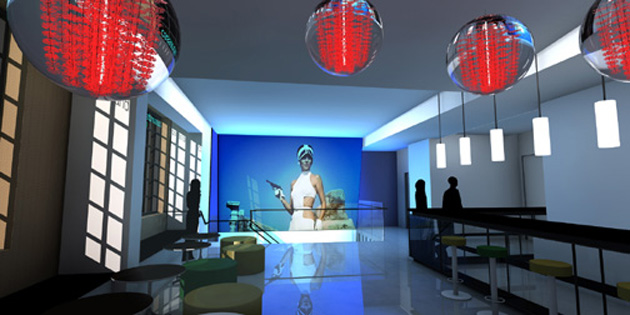 A rendering of the lobby of Cassandra Cinema.

Except for the avant-garde Ocularis screenings in the old Galapagos, North Brooklyn has been a dead zone for movie theaters for years. Why, just the other day the Greenpointers blogger could be heard begging the world to open up a movie theater near her: "I know it will take you years and hundreds of thousands of dollars, but I promise you I will go every Sunday for whatever movie you're screening." Well, here's proof that all it takes is a little weblog whining to get your way: The Observer says a long-talked-about Williamsburg movie theater is inching toward reality.

And it may even open as soon as next spring! It was originally going to be called the Brooklyn Kinetiscope and open last spring, but now it's called Cassandra Cinemas (after executive director Cassandra Lozano). Located at 136 Metropolitan Avenue, the three screen theater will emphasize indie and art house titles, and also host a cabaret and cafe. And perhaps best of all, developers are building three stories of low-income housing for artists and musicians above the cinema! Ha ha, kidding—it'll be three floors of condo units.

The good news is that program director Jamie Hook seems like a real film snob, telling the Observer he sees the venture as "a mom-and-pop theater for the 21st century. The Third Reich mentality of the hipsterdom of Williamsburg would chew alive and rip apart anything it didn't approve of. So, a crass, commercial venture that shat itself out on the streets of Williamsburg, I think would very quickly be wiped under the surface and boycotted and rejected." Which means we'll still have to go crawling to Manhattan for Beverly Hills Chihuahua.

#brooklyn
#cassandra cinema
#greenpoint
#movie
#new
#opening
#theater
#williamsburg
Do you know the scoop? Comment below or Send us a Tip