Will The Little Mermaid Sink or Swim? 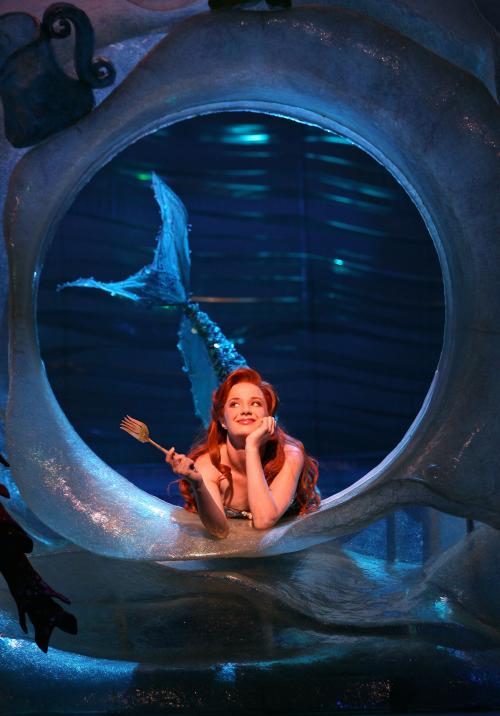 18 years after its big screen release, and 171 years after Hans Christian Andersen penned the fairy tale...The Little Mermaid is ready for Broadway. Ariel & Co. will take the stage in New York starting November 3rd, and since mid-summer the musical has been out in Denver for a pre-Broadway engagement.

The Colorado show took much criticism, however. With shots at the stage design ("visual incoherence"), choreography ("uninteresting"), song composition ("compromised with chaotic presentation"), costumes ("We suppose the kid with the faux-hawk in the yellow sack is a flounder because that's what people call him") and just about everything else...Variety has a harsh review by David Rooney here.

Moxie the Maven looks a little closer at Rooney's rant, saying "Nobody gets off easy in his 10-lashings-for-poor-design review, but he really seems to have it in for Zambello. Check out my little mashup of his mentions of the acclaimed opera director:

Zambello has allowed emotion, charm and enchantment to be drowned in a sea of bewilderingly over-stylized designs... The joyous calypso frolic "Under the Sea" and gloriously romantic "Kiss the Girl" are wonderful songs but Zambello has compromised both with chaotic presentation... Despite Zambello's much-quoted creative choice of "no water, no wires," it's the simple wire work of Prince Eric's near-drowning in the storm or Ariel's underwater transformation from mermaid to human that come closest to engendering a sense of wonderment... if Disney Theatrical chief Thomas Schumacher's aim in enlisting Zambello and team was to develop another eye-popping theatrical event to transcend the kid-fare label, he needs to keep fishing."

She quickly points out that Zambello's own website has some gorgeous photos of her past productions -- so could it really be that bad? For more pics of The Little Mermaid on stage, check out the unofficial blog of the stage show.