Will Parting Be Such Sweet Sorrow For This Year's Romeo And Juliet? 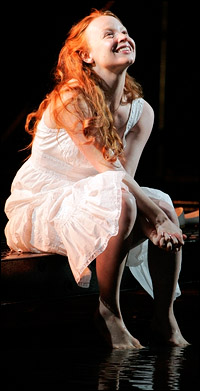 This season Shakespeare in the Park started off with Romeo and Juliet, a play that surprisingly hasn't seen the outdoor Delacorte Theatre since 1968, when Martin Sheen played Romeo to Susan McArthur's Juliet. On July 8th the run will end, and A Midsummer Night's Dream will finish up the season. With notoriously long ticket lines to gain the free pass to a show, many miss out on these performances due to lack of time alone. So how is this season (under Michael Greif's direction) going so far? The reviews are mixed.

AMNY says, "The cast, unfortunately, shows no signs of ensemble chemistry. Frankly, no one seems to be in the same production, particularly Austin Pendleton, whose Friar Lawrence is totally lost amidst the under-directed mess. And Camryn Manheim, who could have easily been a great Nurse, is forced to snort her lines to grab attention. Lauren Ambrose's Juliet is far too mature and understated to be convincing. Though it is not necessary for an actress playing Juliet to actually be thirteen years old (Ambrose is 29), she must credibly convey the character's tender innocence and consuming need to be with her Romeo."

The NY Times, on the other hand, disagrees on most of their points. Describing Lauren Ambrose as "a Juliet truly to die for," and interpreting what AMNY sees at shortcomings, as a clever use of symbolism ("the excellent Camryn Manheim talks fast and bawdily because it’s a way of pushing through the darkness in life.").

Over at Newsday the focus is on the set, which includes a large body of water: "It is all very pretty, if Verona were Venice or if one could appreciate the drama without wondering, constantly, why the Capulets and the Montagues are living in a flood zone."

Has anyone seen the production and had a good/bad experience? For those attending upcoming shows, Playbill has an informative article on what might cancel the nights performance (recently there was an issue with rain, so at the very least bring an umbrella for rain delays!). And if you make a $150 donation to the Public Theater, you can bypass the line (though depending on what reviews you believe, that may or may not be worth it).

Lauren Ambrose in Romeo and Juliet. Photo by Michal Daniel.