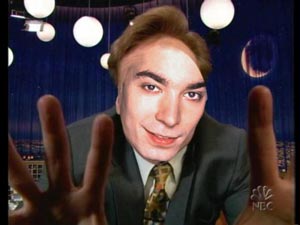 In February rumors started to fly about Jimmy Fallon becoming the next Late Night host when Conan O'Brien leaves his current spot to take Jay Leno's spot. It's an after-hours game of musical chairs! (Though no one knows where Leno will end up, it is said he'll likely stay in the late night game.) NBC chief Rick Ludwin says that Fallon is now at the top of the short list for possible Late Night hosts.

"Fallon signed a developmental deal with NBC earlier this year, a deal that at the time included the possibility of his replacing O’Brien, who is scheduled to take over Leno’s chair in 2009.

Now NBC has zeroed in on the Saturday Night Live alum as its choice for 12:35 a.m., a slot in which SNL chief Lorne Michaels still has a piece of ownership. Those familiar with NBC’s thinking say the network believes that Fallon’s following O’Brien would make a very compatible two-hour block."

With nationwide grumblings about this being heard loud and clear, the network stands by their Fallon. There really isn't much of a better option (seriously, Carson Daly?), and besides, if he's safe in a network studio we're in no danger of a sequel to Taxi being made. On top of Fallon's work at SNL he also strayed from NBC for a moment to guest host for David Letterman in 2003. His old Weekend Update co-host, TIna Fey, recently said of him taking over for Conan: “I think it’s a great idea. He’s really funny and loves to talk to people; it must be that Irish charm. Hosting a talk show is so hard, having to do the comedy and the interview skills, but I actually think he’s really well suited for it.” We're wondering why Fey (or any woman, for that matter) isn't up for the job.

Would you rather see an unfamiliar face during the time slot? You can always vote for Joe! He's already started blogging his future of hosting the show in 2009. Whoever gets picked to sit in the coveted chair at Studio 6A, the announcement has to be made at/prior to next May's upfront presentations. Something else that will be announced by that time is if NBC will move The Tonight Show from Burbank back to New York, where it began. This would of course cause a huge guest war between the 11:35 late night shows! To be continued...