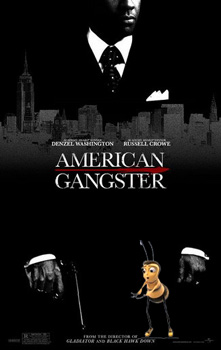 Two movies set in New York are coming out today, and both are getting a lot of press, promo and opined upon.

American Gangster is set in 1960-70s New York and stars Russell Crowe as a detective working to take down a real-life heroin kingpin, Frank Lucas (played by Denzel Washington). Lucas claimed to gross $1M a day on 116th Street dealing drugs, which he got to the States by smuggling in the coffins of soldiers returning from the Vietnam War. Some are calling the flick the next crime classic, and Jay-Z has even written a concept album (of the same name) to accompany it. None of his songs are included in the soundtrack, however, in an effort to keep that '60s and '70s feel.

On the flip side of the big screen today is Bee Movie, which has been built up with an overactive ad campaign that has made us cringe at the very sound of Jerry Seinfeld's voice (we hate you, NBeeC!). This one's about a bee who graduates from college, befriends a Manhattan florist, sues humans for eating honey, yada yada yada. USA Today smashed the Dreamworks creation with a D rating (1/2 a star, out of 4), and we don't expect to see many sweet words poured onto this one.

Rotten Tomatoes shows an average rating of 7.1/10 for American Gangster, with Bee Movie only getting a 5.9 -- not that there's anything wrong with that.