Why Pay For A Dating Website When NYC Phone Booths Have So Much Free Space?

If we've learned anything from living in NYC, it's that securely taped ads in abandoned phone booths and on telephone poles can be dating profiles (and also opportunities for revenge!). Nearly four years ago, we encountered Hell's Kitchen casanova Malik Turner, whose vividly detailed personal ad struck a chord with people throughout the city. Turner, now 44, has apparently not found true love yet, as he has put up some brand new signs around the neighborhood recently. 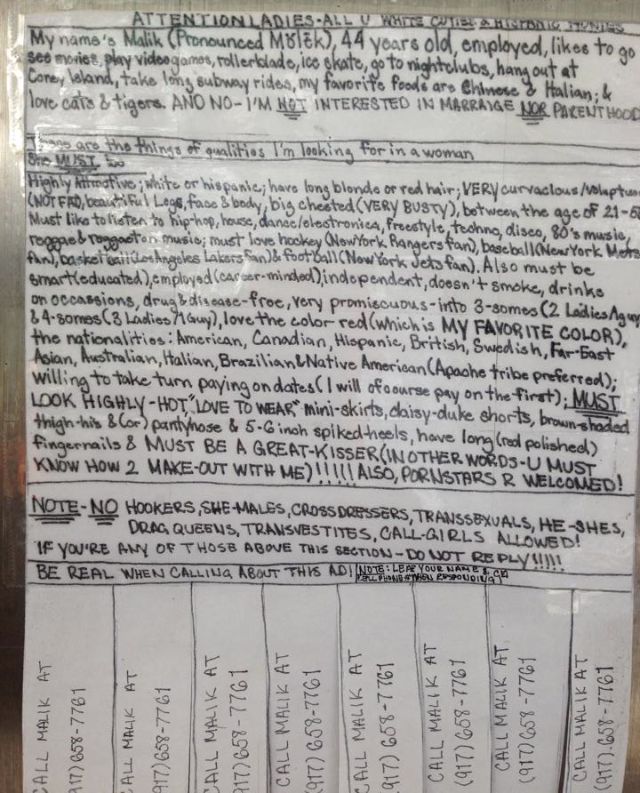 But in analyzing how he updated his profile between 2010 and 2014, we realized Turner has a lot to teach us all about dating in the modern world. We broke it down below:

It's About Who You're Looking For, Not Who You Are: Turner's 2010 dating profile was divided roughly 50-50 between things about himself (favorite sports teams, color, animals, cars, etc) and what kind of women he was interested in ("Very Promiscuous"). What Turner seems to have realized over the last four years is that ladies are far more concerned with what YOU want. It's not about sharing interests—it's about finding a lady who embodies all of your interests to a tee. So where once Turner confided in potential paramours—baring his heart and soul and Rangers/Mets/Jets/Lakers fandom, his love for Reggaeton and the color Red—in 2014 the more jaded Turner is looking for someone who already IS a Rangers/Mets/Jets/Lakers fan, who already loves Reggaeton and the color Red.

Headlines Are Important-er Than Biographical Details: Back in 2010, Turner had no headline. He just immediately dived into things with classic first date stuff, like his name, exact date of birth, age and current marital status ("Single"). But who was this ad aimed at? If a person were to casually skim it, they might not even realize that Malik is looking for White and Hispanic women only! But 2014 Turner knows better: he has a headline right at the tippy top reading, "ATTENTION LADIES: All U White Cuties & Hispanic Honies." No confusion for his audience there.

Women Don't Care What Your Job Is, Only That You Are Employed: In 2010, Turner was an "Air Smallsort Sorter/Bagger with the United Parcel Services." We assume he still has the same job, although we can't know for sure, because 2014 Turner only mentions that he is "employed." Details schmeetails, he brings home the bacon. 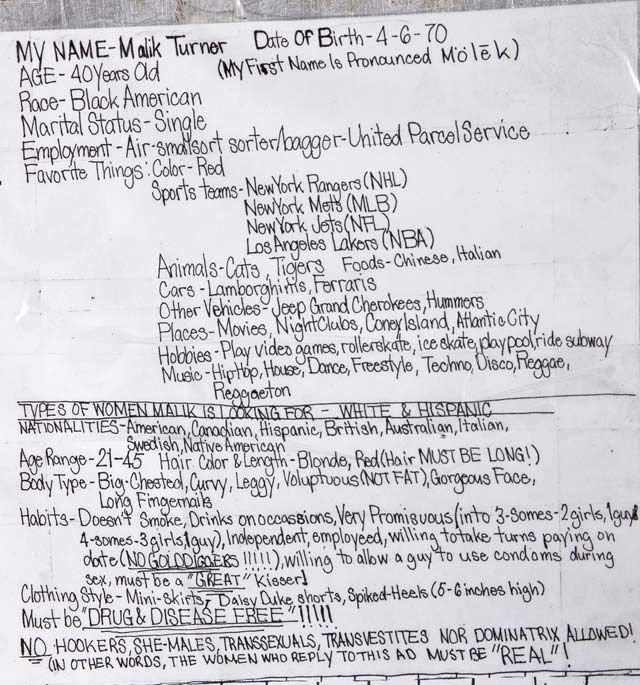 Priorities Change As We Mature: For 2010 Turner, there were two requests that were underlined and blessed with the largest amount of exclamation points on the entire sheet: "NO GOLDDIGGERS!!!!!" and "DRUG & DISEASE FREE!!!!" But priorities change, man. Four years leaves a lot of time to learn the hard knocks of phone booth dating etiquette, and Turner shows scars. The first all caps declaration at the top of the 2014 sheet makes it clear that diseases and golddigging are the least of his concerns now: "NO I'M NOT INTERESTED IN MARRIAGE NOR PARENTHOOD." The drugs/disease warning gets buried in the second section, and definitely seems less important to him nowadays than a woman "KNOWING HOW 2 MAKE-OUT WITH ME!!!!" Golddigging isn't even mentioned once, so clearly Turner respects honesty most of all.

Narrow Your Scope: At the same time, we can't be opening the phone booth gates for every woman in this city. To that end, Turner gets extra specific in 2014: "Native American (Apache Tribe preferred)."

Learn To Compromise: If accepting a few golddiggers with venereal diseases is the price to pay for keeping the baby-crazy mamas out, then so be it. Compromise is an important part of modern dating. To that end, Turner has upped his age range from 25-45 in 2010 to 25-50 in 2014.

We've called Turner to try to glean more wisdom but got no response; any red or blonde-haired women who are equally intrigued can also call him at (917)-658-7761.