Why Has Brooklyn Bridge Park's $5 Million Pedestrian Bridge Been Closed This Month?

The sign this morning... and for the past three weeks. (Photo by Jen Carlson/Gothamist)

Sometime around August 9th, Squibb Park Bridge—a pedestrian bridge connecting Brooklyn Heights to Brooklyn Bridge Park—was closed off to the public. The bridge, which was designed to have a bounce in some sections, has felt a little different all summer—a bit creaky and completely slanted in certain sections. We've also spotted split wood in some planks. However, when we asked a rep for the Brooklyn Bridge Park Corporation about the bridge closure on August 15th, the nearby condo construction was blamed—"We have needed to close the bridge intermittently due to construction of Pierhouse. This last week represented one of the final stages of the SOE (support of excavation) process around the main bridge columns."

When we asked about the bridge specifically, a spokesperson said, "The warping happens from time to time due to use and temp fluctuations and requires the re-adjustment of cable tensions. Our bridge engineers are on site this week making those adjustments. The bridge should be open again early next week." But it never reopened, and the bridge has now been closed for about three weeks. We reached out the Brooklyn Bridge Park Corporation again this morning for a current status on the situation, and will update when we hear back. 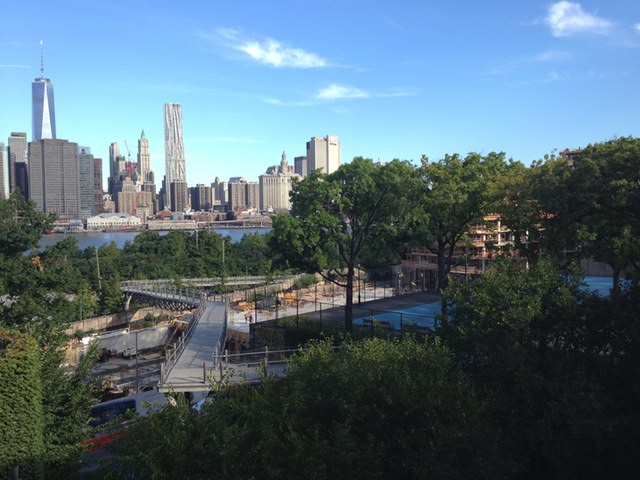 The bridge, which cost $5 million and opened in March of 2013, has had to sustain more foot traffic than ever this summer, with the development of more piers in Brooklyn Bridge Park leading to more visitors. But for those visitors now bemoaning the bridge's closure... there's always been a quicker way to get to the park anyway.

#pedestrian bridge
#pierhouse of horrors
#squibb bridge
#original
Do you know the scoop? Comment below or Send us a Tip