Why Are You Living In Gowanus When You Could Be Living In Malibu?

Exterior of an LA home and exterior of a NYC home. (via Realtor / Streeteasy)

The LA Times has published a piece titled: "A Manhattan studio costs how much? What your L.A. money could buy in New York." It's ostensibly about how you get more for your money in the real estate market out West. But it's really about how a large, shiny living space is important to the people of Los Angeles, and less important to New Yorkers.

On a per-square-foot basis, many of L.A.’s iconic neighborhoods are priced far more reasonably than their New York counterparts. Santa Monica ($997/square foot) and Beverly Hills and Bel-Air (both $941) are less than half the price per square foot of Greenwich Village ($2,576), Gramercy Park ($2,424) or Tribeca ($2,338). Malibu ($905/square foot) and Pacific Palisades ($900) are better deals space-wise than Park Slope ($999). More surprisingly, Malibu and Beverly Hills are more affordable than Brooklyn’s Gowanus ($1,047) — a formerly industrial area that contains one of the most polluted bodies of water in the United States.

Here's their graph, which uses square-footage to confusingly pair up Los Feliz with Brighton Beach, and Silver Lake with Bensonhurst. 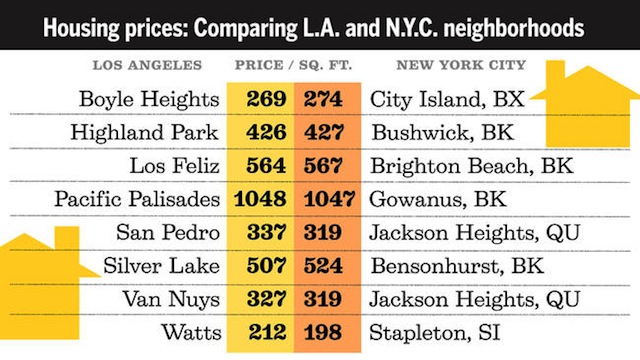 It's not very surprising that the Angelenos have taken such a shallow stance on real estate, if stereotypes were ever to ring true, these are a people who live a life driven by unrealistic beauty standards and pure fantasy. It's a land where the accumulation of wealth is more important than the accumulation of knowledge. Here in New York, we embrace the realness life has to offer, blemishes and all. And we're not even smug about it.

Here we emerge from our tiny closet apartments, and breathe in whatever smell the people of New York curated for us over night. It's always so different, so bold. In restaurants we squeeze in right next to our fellow dining companions; at home we listen to our neighbors playfully try to entertain us with a rendition of Bach's Bradenburg concertos played entirely by stomping on the floor and dropping loose change; on the street we are also always close to people and on the subway too and there's no air...

Oh fuck it; we can live in Malibu for the same price as a shitty studio in Gowanus? If our Greek Island commune doesn't pan out, we're so in.