Why Are These Men Taking Up Too Much Space On The Train, Plane, Supreme Court Photo...

We've published more than a few stories on subway etiquette around here (Don't: Use the molded plastic chairs as substitute toilets. Do: Be a small shark commuting from Coney Island.) But there is one incredible breach of etiquette that happens with such frequency, we can't even muster the energy to write about it anymore: Male Leg Spreading.

There is no female straphanger in New York who hasn't been subjected to this phenomenon: Finding oneself seated on the train, only to realize that the passenger next to you has spread his legs to three times his actual width, like a threatened puffer fish or, ironically, a female human in labor. You, the innocent bysitter, have folded upon yourself, trying desperately to avoid contact with the Outstretched Leg. (I occasionally suspect this is just what they want: "Awww yeeeah, she's touching my leg." *Stretches further in triumph.*)

Is this a specifically male problem? Yes. Look, there's a Tumblr to prove it—Men Taking Up Too Much Space On The Train. To be fair, men take up space in other, more gender-neutral ways, like putting their feet up and placing their bags on the seats. But MLS is by far the most common offense. As the Toronto Star shrewdly points out, even the Supreme Court Justices Clarence Thomas and Antonin Scalia ("the dumbest members of the court") can't get it together: 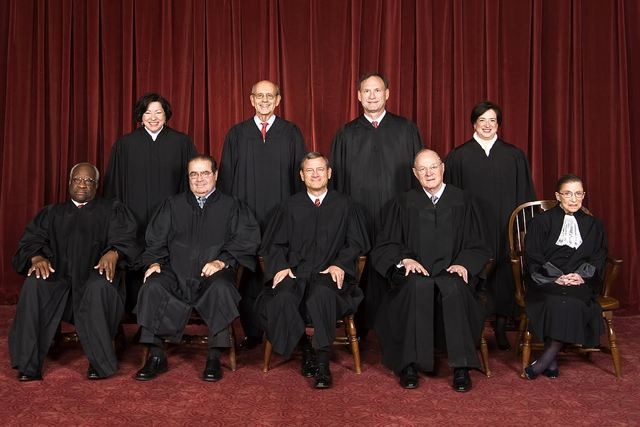 The question is, what can we do? We've written before about the scourge of "man-sitting," which, by the way, violates NYC Transit's Rules of Subway/Bus Conduct. Jezebel went balls to the wall last year in a fiery take-down ("Maybe these fucking idiots think we women are impressed when they act like their penis is so fucking big that they can't even try to make room for you next to them on the bench"), but the fatal flaw here is that men don't read Jezebel, and if they do, they're certainly not the manly-men flashing their wares on the train.

Some notes from Around the Office:

Ben Yakas: Looking through the photos...I think it's obvious that one should NEVER lie down on train seats (unless seriously ill). That's gender-blind as well. People who do that are lost causes. To play devil's advocate here for my fellow man: If the subway isn't crowded, I think a lot of guys naturally would rather sit with a slightly wider stance because of ...ya know, comfort. Especially if they are on the tall side. Things can get uncomfortable quickly! And it's not about SIZE, it's about placement. And it isn't like one can adjust in public.

John Del Signore: It's territorial alpha-male meathead shit. Like posting up in the club with your arms really far apart from your torso because your lats are so fucking ripped.

#chivalry
#man sitting
#subway etiquette
#original
Do you know the scoop? Comment below or Send us a Tip