Who's Tipping What at NYC Venues? 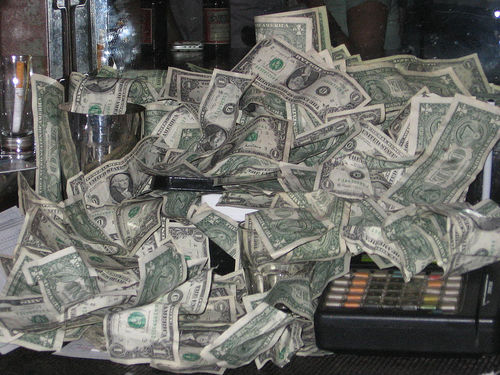 Do certain band's fans tip better than others? Sasha Frere-Jones does an uncontrolled study at Bowery Ballroom -- and Chromeo fans, you're busted.

“When Chromeo played, their crowd drank house vodka and Budweiser. Didn’t tip. Some of them did what I’ll call the slide-backs. They put a dollar down on the bar, wait until you turn your back, then palm their buck and walk away. Classy. When your night starts out with “What’s your cheapest drink?” that’s also not good.”

Classy, indeed. So who is picking up the slack and keeping these bartenders in the green? It's the hard-drinking hard-rockers, of course. Specifically Preistess fans who fancy a little whiskey with their beer and often tip $2 per drink. Similarly, Bogmen fans aren't tight-fisted either, as Bowery bartender Amy Korb tells SFJ, "It’s nearly impossible to keep the Bud Light stocked in the cooler or the Ketel on the shelf. They draw investment bankers, guys who shout and get inappropriate, but, damn, they need that Bud Light."

What do musicians tip when they're in the audience? We asked Craig Wedren (ex-Shudder to Think) to divulge his tips on tipping. He tells us:

"My (general) rules for tipping: ALWAYS TIP. ROUND UP, not down (this applies more to taxis and restaurants than bars).

What kind of change are you leaving at the bar?

Photo of tips at Don Hill's via NYCGP's Flickr.