Who'll Save the Children from Katie Couric, Britney Spears Vaginart?

Not us—see it below in all its NSFW, uh, glory. The "it" we're talking about here, be warned, is artist Jonathan Horowitz's 2008 piece "CBS Evening News/www.Britneycrotch.org," which frames two big digital prints on top of each other: The top image is Katie Couric at her news desk, and the bottom is Britney Spears’s infamous crotch shot, photoshopped to match Couric's upper half. It's the artistic antithesis of a Reeses Peanut Butter Cup, and you can see it at P.S. 1 in Queens with your own eyes (though the museum politely asks that visitors not flush their gouged-out their eyes down the toilet).

Horowitz's provactive mash-up has writer Fred Bernstein miffed, because he visited the exhibit with his 7-year-old twin sons but didn't notice the warning sign on the wall. Luckily, he spotted the piece before his sons did, and he quickly ushered them out of the room before they witnessed unspeakable horror. But it was a close call! In a City Room opinion piece, Bernstein declares, "It’s O.K. if P.S. 1 wants to show vulvas in extreme close-up... What’s not O.K. is that the only warning to parents was a tiny sign at the entrance to the gallery." 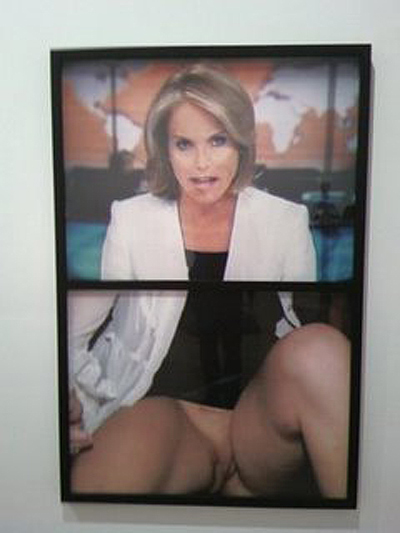 #art
#britney spears
#cat's in the cradle
#children
#innocence
#Jonathan Horowitz
#katie couric
#kids
#ps 1
#vagina
Do you know the scoop? Comment below or Send us a Tip