Who Owns The Red-Soled Shoe: Louboutin, Or All Of Us? 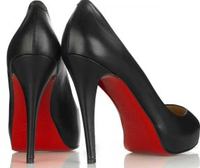 As everyone knows, you can spot a real Christian Louboutin shoe from its red sole (thing we learned watching Sex and the City!), but recently Yves Saint Laurent started biting the designer's style—a fashion nightmare that's been playing out in New York City court. Today U.S. District Judge Victor Marrero rejected Louboutin’s lawsuit against YSL, and request to stop sales on their own red-soled shoe, Bloomberg reports.

The judge explained, “Because in the fashion industry color serves ornamental and aesthetic functions vital to robust competition, the court finds that Louboutin is unlikely to be able to prove that its red outsole brand is entitled to trademark protection."

Louboutin introduced the red-sole in 1992, and the U.S. Patent and Trademark Office awarded them trademark on it in 2008. The company's lawyer says it's "the lifeblood of the company," but YSL's lawyer says it's “a trademark registration that never should have been issued and can’t be enforced," and now seeks to have the trademark cancelled. They'll be back in a Manhattan courtroom on August 17th, where Louboutin can argue against the cancellation of the trademark. We're guessing pretty soon we'll all be able to buy a version of these puppies at Payless.

#christian louboutin
#lawsuit
#red sole
#shoes
#YSL
Do you know the scoop? Comment below or Send us a Tip