Whitney Houston's NJ Home Is On The Market Again, Realtor Hyping It As Scene That "Brought Her Down" Whitney Houston's home, which she shared with Bobby Brown (and where Being Bobby Brown was filmed in 2005), is now on the market for $1.97 million. The house is located at 22 North Gate Road in fancy Mendham Township, New Jersey, and is next to another home she had just sold in in 2010. The mansion was put on the market before Houston's death, however, and possibly because she was on the road to bankruptcy.

It was listed for $2.5 million in 2009 and brought down to $1.97 million last year, before it was taken off the market. It was relisted in January at $1.75 million, according to reports, and now it's up to the $1.97 million price. The listing is held by Robert Cross of CarProperty.com—he says the 12,561-square-foot mansion is "a great conversation piece for anyone," and notes that Houston "Married, lived and partied in this New Jersey mansion... This house was also the scene of the activity that brought down this incredible musical diva over a 15 year cycle." Classy.

And isn't putting a photo of the ambulance outside of the hotel Houston died at in the real estate listing a bit... tacky? 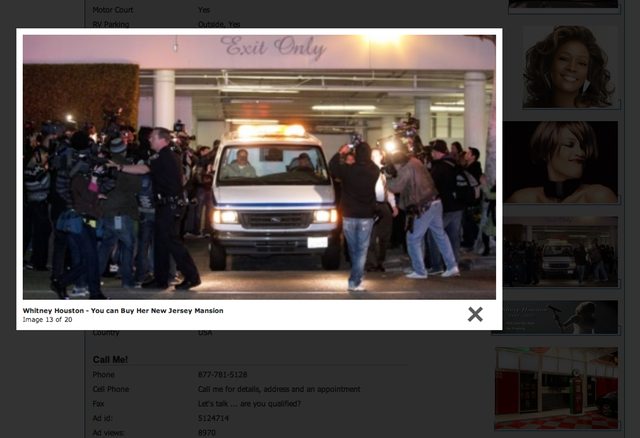 #for sale
#house
#market
#new jersey
#real estate
#Whitney Houston
Do you know the scoop? Comment below or Send us a Tip