Where Was Yellow Hook? 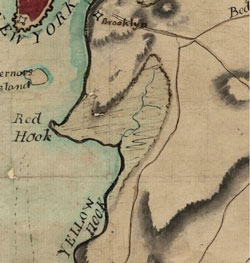 Perhaps crazier than the mystery of where 5th and Broadway was in Williamsburg... the blogger at Pardon Me For Asking dug up an old map showing something called Yellow Hook. Indeed, there was a Yellow Hook! The NYPL (where there's currently a great exhibit mapping New York's shoreline), has some more evidence of this magical land, which was south of Red Hook.

According to the resourceful and always factually accurate Wikipedia, Yellow Hook was actually what is now known as Bay Ridge! It was named for the yellow hue of its soil "by the original Dutch settlers. This name was changed in 1853 after yellow fever struck the area and residents realized what an ill fit it was given the circumstances."

PMFA now has an update, stating that the map at right may be "a stylized version of a U.S. Coast Survey map drawn in 1837."