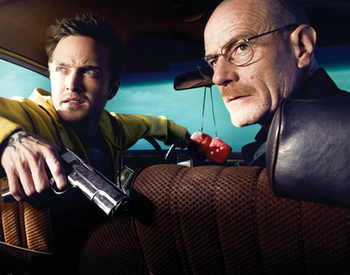 All bad things must come to an end, including insanely good television shows like Breaking Bad, which begins its final season on August 11th. We've already marathoned the series in anticipation and seen the MoMI show so now it comes down to seeing just how bad it's going to break. Since you'll probably need a friend's shoulder to hide behind when Walt makes his last stand, a few bars are offering a safety-in-numbers approach to viewing the final season. Here's where to get your meth on:

You won't find any Los Pollos Hermanos at vegan-friendly Pine Box Rock Shop, instead the Bushwick bar offers electric Blue Sky cocktails ($4) and test tube shots ($3) at their Breaking Bad Season Premiere Party. They'll screen the 9 p.m. premiere on their 96" television with some show-based trivia to keep you focused during commercials breaks. If you think the show is too scary to watch alone, the bar will be screening all eight episodes on Sunday nights.

Also in Brooklyn, Union Hall bids a tearful farewell to Heisenberg and Co. with free viewing parties of the entire season. They're offering a line of specialty $6 cocktails like The Mister White and ABQ Sunset and of course some Crystal Blue Persuasion. Use your elixir to play drinking game BINGO. Salud!

Continuing their TV show traditions, Professor Thom's offers a spot to get bombed on happy hour-priced drinks and free "plot determined" shots. Drafts are $3-$4, glasses of wine and well drinks are $4 and the Big Blue is free. Okay that last part isn't true but there's no cover at the door, so it's close.