Where To Spot Gorgeous Guastavino Tiles In NYC

From the Whispering Gallery at Grand Central Terminal to the elephant house at the Bronx Zoo, Guastavino tiles are all over the five boroughs. Rafael Guastavino came to New York from Spain in 1881, and brought with him a signature technique of creating vaults using clay tiles: his vaults were fireproof, and could span broader interiors than those of previous architects. Along with his son, Guastavino founded the Guastavino Fireproof Construction Company, which designed its unique vaults in over 1,000 locations across the globe. Some 250 of those are right here in New York City, and below are some of the best places to spot them in New York City—let us know in the comments if you've seen any others. 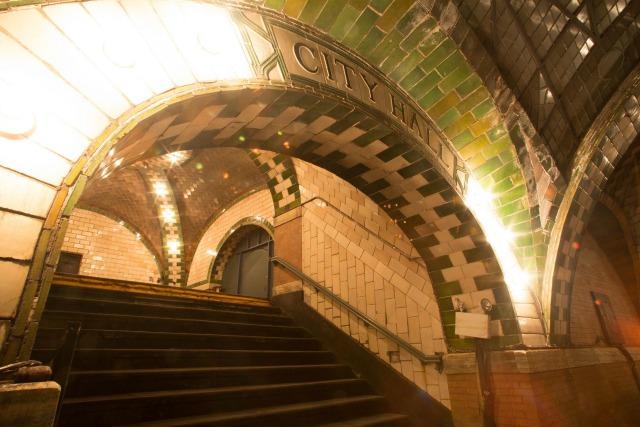 The abandoned subway station at City Hall closed in 1945, but you can still catch a glimpse of its stunning tiles if you stay on a downtown 6 train as it turns around past the Brooklyn Bridge station. (You can also take a tour through the Transit Museum, but some are members-only, and they cost $50.) The station has 15 Guastavino arches, and has seen some damage over the years, though many of the tiles are still intact. According to subway historian Joe Cunningham, the station inspired the slime-filled abandoned subway station in Ghostbusters II.

Now called the Cherokee Apartments, this building at York Avenue between East 77th and 78th streets was built in 1912 with those with tuberculosis in mind: its balconies were meant to allow those afflicted to get fresh air, and its open-air spiral staircases, designed by Guastavino, were meant to discourage the spread of the disease. Today, the building is a co-op, where studio apartments rent for $2,400.

The Elephant House at the Bronx Zoo

Ceiling of the Elephant House of the Bronx Zoo (1908)

Once the palatial home to the Bronx Zoo's elephants, this palatial structure now houses the Zoo Center, which is in turn home to reptiles, Aldabra tortoises, and Komodo dragons. The Guastavino arches and vaults are accented by decorative elephants, hippopotamus and rhinoceros.

The Registry Room at Ellis Island

The registry room has been restored to look as it did when it was operational between 1900 and 1924, when it typically saw 5,000 immigrants come through the space in a single day. This is where immigrants were subject to exhaustive medical and legal examinations, and were directed to one of three doors at the end of the hall: one to the ferry, one for further detention, and one for deportation. Guastavino's tilework was only added in 1918. 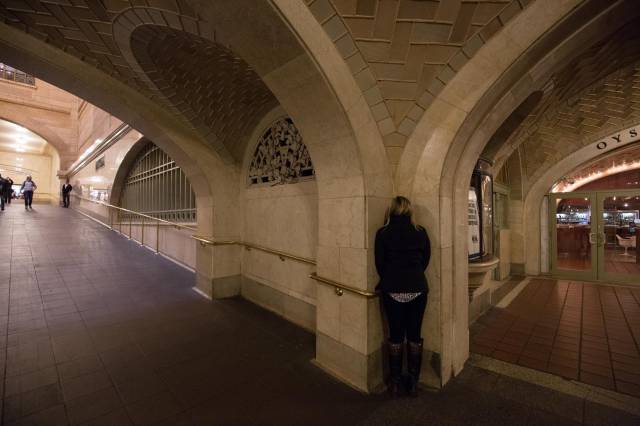 Grand Central owes its famous Whispering Gallery to the Guastavinos: it's thanks to their unique arch design that whispers can travel from one corner to another diagonally opposite. The Oyster Bar at Grand Central also sits under Guastavino tile vaulting:

Guastavino's, Under the Queensboro Bridge 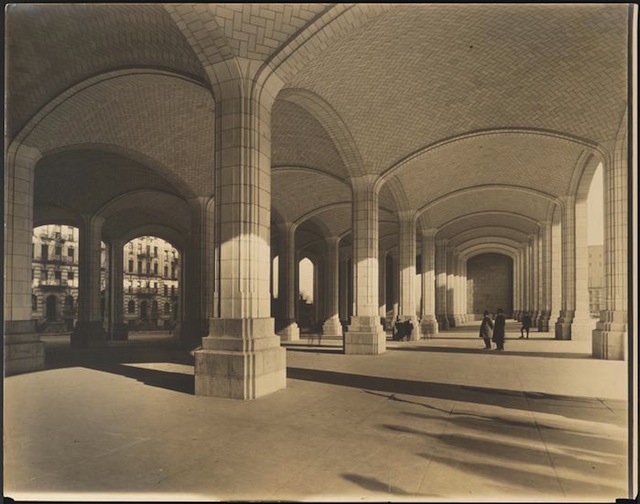 The Queensboro Bridge opened in 1909, with the Manhattan approach supported on Guastavino tile vaults. Guastavino and his son developed the area underneath the tiles into an outdoor market, known then as the Bridgemarket. Over the next century, the space played host to a number of business, including a furniture shop and two restaurants. Today, it's an enclosed event space named after the architects themselves. For years, the vaulted tiles also comprised the ceiling of the neighboring Food Emporium, but that location closed in 2015, and there's not yet a new tenant reported at the space. 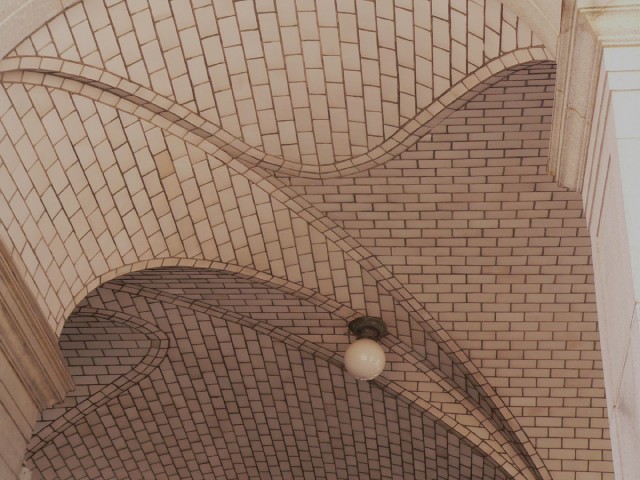 You can spot the tiles under the Municipal Building at 1 Centre Street if you take the J or Z to Chambers Street. Construction on the building started in 1907, and it was the first to have a subway station include in its base. Guastavino tiles cover the south arcade, while the central arch was inspired by a Roman palazzo.

The Boathouse at Prospect Park

Rachel and Patrick tied the knot!

The Central Crossing at the Cathedral of St. John the Divine

Just a reminder that our annual #Thanksgiving Day #Eucharist is tomorrow at 10:30 am. Although we are open during our regular hours (7:30 am-6 pm), it is the only worship service of the day and we hope to see you then! 💒 (📷 by Helena Kubicka de Bragança)

Guastavino constructed the central crossing in the Cathedral of St. John the Divine in 1909, intending it to be a temporary roof. Today, it's still one of the largest free-standing domes in the world. The tiles can also be seen in the cathedral's spiral staircase, which can be seen during regular "vertical tours" of the space.

The interior of the Washington Square Arch 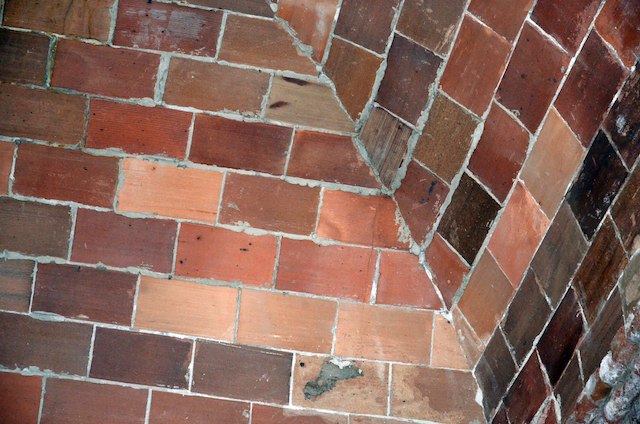 Some of the most fascinating elements of the 72-foot-tall Washington Square Arch are in its interior—which is closed to the public, but which we got a look at in 2013. The narrow spiral staircase snaking up the arch's western pier is made of Guastavino tile, as is the ceiling of the 17-foot-tall attic space, punctured by three skylights. If you're lucky enough to make it inside and get up to the top, you'll be treated to some magnificent views.

Some of the most colorful Guastavino arches can be seen at Wolfgang's Steakhouse on Park Avenue. Blue and white tiles cover the restaurant's ceilings, and underneath them, diners feast on $49 sirloin and filet mignon. The restaurant has locations all over the country, as well as in Tokyo, but Guastavino's work is unique to the 34th street location. In 2014, the Museum of the City of New York had an exhibition on the Guastavinos' work in New York City, and launched a tool to help uncover more of the architects' work across the globe. You can check out the crowd-sourced map here, and if you think you've spotted some tile that's missing from the map, submit it to the database here.

#architecture
#design
#guastavino
#guastavino tiles
#tiles
#original
Do you know the scoop? Comment below or Send us a Tip