This year's Macy's firework display promises to once again dazzle over the Hudson to ring in our 236th year of independence. But unless you live on the West Side in a towering high rise, are able to cross the river to New Jersey's neighboring shores, or willing to subject yourself to hours of standing on a crowded pier, you don't have much of a chance to experience the show in all its fiery glory. Luckily, a number of establishments are offering fireworks viewing specials for those with a few bucks to throw around. Here are our best bets to take in the show in style:

Gothamist approved Sky Room boasts the highest rooftop bar in the city, perfect for scanning the explosions in the sky. A $100 ticket buys you access to a 5 hour open bar and a "picnic" buffet replete with burgers, pigs in a blanket and other summer fare. There are 360 degree views all around so if you get bored watching the display you can take a break and admire the city's beautiful night views.

The swanky Hudson Terrace rooftop bar has an ideal location just north of the display near the West Side Highway. $135 buys you a 4-hour open bar plus a full summer BBQ buffet and a front row seat for all the fiery action. Tickets are available here.

The Circle Line has put together a pier party on their dock on the Hudson. There will be carnival games, a BBQ and beer and wine. Tickets are available on their website for $89 but unfortunately you pay for food/drink out of pocket. 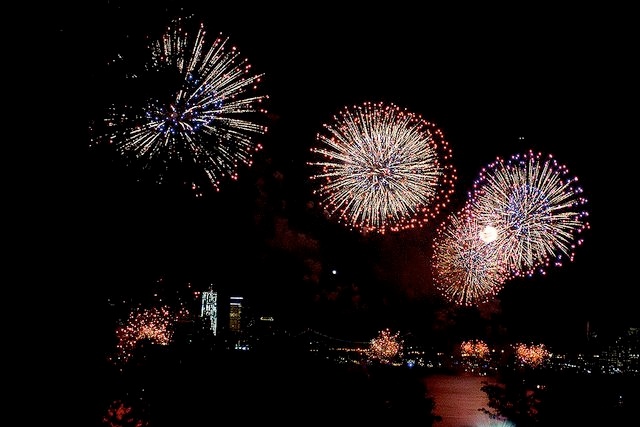 A team of Brooklyn-based companies—including Brooklyn Roasting Company, NY Distilling Company and Brooklyn Brewery—have joined forces to sponsor a BK Boat Bash. Sip gin cocktails, cans of EIPA and single origin cold brews while you dine on sausages, watermelon and other summer treats. Tickets cost $100 and will definitely sell out fast so get yours now!

And this just wouldn't be a 2012 party if food trucks weren't somehow involved! To that end, ARRIVAL: An All-Day Rooftop Beach Party promises an day-long America Fuck Yeah celebration with "a dozen of the city's most exciting food trucks" like Phil's Steaks, Souvlaki GR and Milk Truck and a dance party with music from Wyclef Jean, EC Twins and Lil John. You'll also get access in to "NYPD Frozen Zone"—sounds refreshing! GA tickets are $55 but the bar and aforementioned food trucks will cost you extra.

You won't get the full waterfront view as you would as some other places, but the deal at the Dream Downtown is one of the best we've come across. For just $32 you'll be treated to a Lobster Boil that includes a 1 1/4lb lobster with Long Island Steamers, Andouille sausage, red bliss potato, sweet corn and cornbread prepared by Top Chef alum and Executive Chef Manuel Trevino. Not too shabby considering you'll still catch most of the action from their lovely 12th floor terrace! Email phdoffice@taogroup.com for reservations.