Where To Celebrate Pride Month In NYC

June is Pride month, and this year it's a big one, as many institutions and organizations are looking back at the history of the LGBTQ movement as we approach the 50th anniversary of the Stonewall Riots, and the first NYC Pride Rally that was held one month later in 1969. We'll have a separate guide coming up with details about the big annual parades & marches taking place, but below find some other events to drop by throughout the month.

This exhibition, spanning two galleries, features over 150 works that chronicle the 50 years of the LGBTQ movement following Stonewall. Works by visual and performance artists like Holly Hughes, Robert Mapplethorpe, and Andy Warhol will be on view. 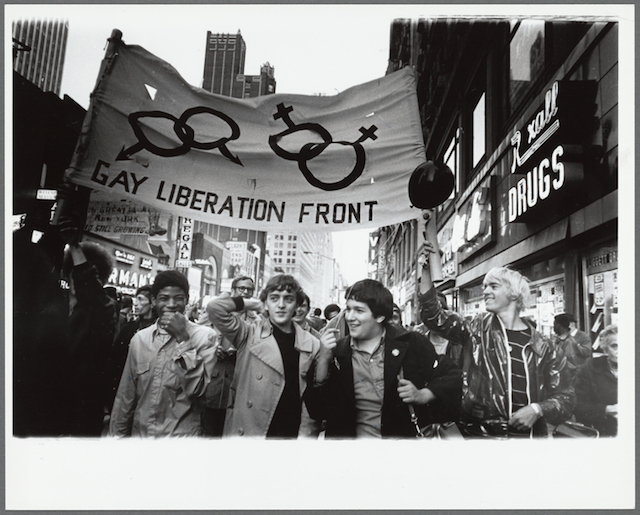 This extensive exhibition honors the 50th Anniversary of the 1969 Stonewall Uprising—a six-day clash between police and civilians ignited by a routine raid on the Stonewall Inn, a gay bar in New York City. The series will feature everything from live events to book recommendations.

This one-man play kicks off the month-long series, Harlem Pride celebrations, happening throughout June. It tells the story of the much-beloved ‘70s soul singer and explores his struggles lifelong with mental illness.

The birth of the LGBTQ movement is retold through music in STONEWALL opera, which is written by Pulitzer Prize-winning librettist Mark Campbell and will be the first opera to feature a transgender character. According to the show’s website, STONEWALL "is a moving and explosive new American opera that captures the rage, grit, humor and, finally, hope of the LGBTQ community's uprising in a Greenwich Village dance club on one hot night in June 1969. The work is divided into three parts and follows a diverse group of characters whose lives collide at that pivotal moment in history when the police push them too far and they find the courage to fight back."

The Jewish Museum is organizing several art gallery walk-throughs and discussions throughout the month of June. Ross Bleckner, Gert Wollheim, and Deborah Kass will host a discussion exploring the intersection of queer identity and Jewish culture as it reveals itself in painting, and works found in the Jewish Museum’s collection in particular. See the above link for a full list of programming. 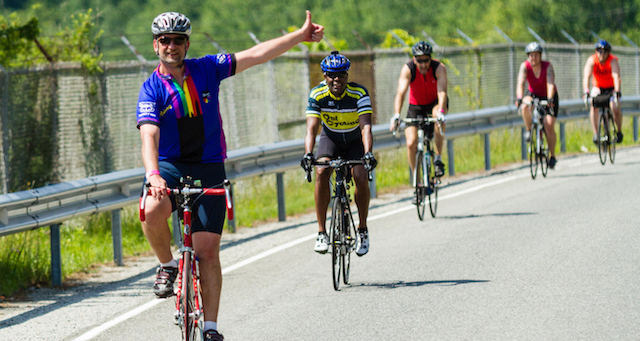 On June 2nd, bikers will be riding in unison in celebration of freedom and equality for the LGBTQ community. At the Hudson Greenway finish line, there will be a BBQ; a portion of these proceeds will go toward the Fearless Flyers Youth Cycling program.

This will be the Phluid Project’s first ever Vogue Ball—filled with dancing, costumes, and death drops! Phluid Project is “the world’s first gender-free store,” a brick and mortar located in SoHo that sells clothing options and merchandise for people at any place on the gender spectrum. The unisex/nonbinary brand celebrates queerness year round, so naturally they're hosting a ball during Pride Month!

This rally is held every year to commemorate the Stonewall uprising. Organizers say that as "LGBTQIA+ rights and human rights are under attack by the current political environment" they will bring together "community activists, organizers, politicians, and more for this unprecedented moment in our history. Take a stand, show up in force, and make your voice heard in this re-imagined Rally experience." The first NYC Pride Rally took place a month after the Stonewall Riots in June 1969, "when 500 people gathered for a 'Gay Power' demonstration in Washington Square Park, followed by a candlelight vigil in Sheridan Square."

Every Friday, from now through September 27th, The Whitney will lead free walking tours that bring you face-to-face with the LGBTQ history in the Meatpacking District, the neighborhood that surrounds the museum. According to The Whitney’s website: "This sunset walk looks to the past to reflect on the present by bringing visitors to select sites marked by queer history and culture. From the Hudson River piers to the clubs, visitors are invited to consider their connection to the changing landscape of the neighborhood that the Whitney now occupies as well as to the history of the city." 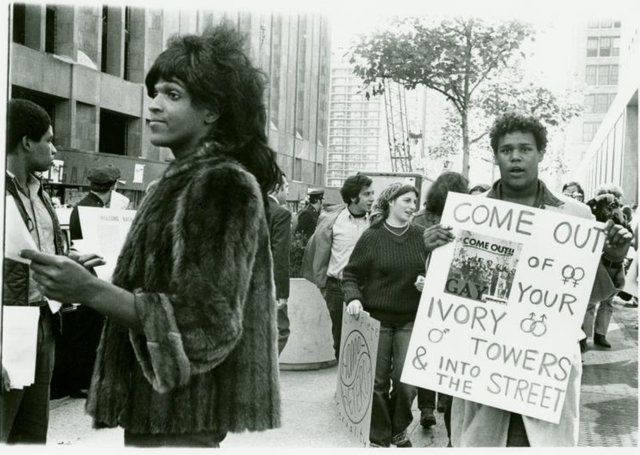 Marsha P. Johnson hands out flyers for support of gay students at NYU. (Photo courtesy of the NYPL)

Portraits of Pride @ The Museum of the City of New York

The Museum of the City of New York is screening two short films—"Stormé: The Lady of the Jewel Box" and "Happy Birthday, Marsha!"—which introduces audiences to Stormé DeLarverie and Marsha P. Johnson, two activists who spearheaded the Stonewall uprising. There will be a discussion with the director of "Stormé: The Lady of the Jewel Box,” following the screenings. This week it was announced that the city will dedicate a permanent monument to Marsha P. Johnson (along with fellow transgender activist Sylvia Rivera).

Labyrinth Dance Theater's new dance concert, "Come Back Once More So I Can Say Goodbye," kicks off this June. The performance tells the story of the NYC gay community between 1965 and 1995. Artistic director Sasha Spielvogel brings these decades to life using live original music, historical footage, and political soundbites, which all bolster the choreography. Proceeds will go to the Ali Forney Center, Broadway Cares/Equity Fights AIDS, GMHC and Live Out Loud.

E. Patrick Johnson will take the stage to during the institute's 2nd annual Pride program. The author "will discuss his collection of oral histories for his book," Sweet Tea, which focuses on the experiences of southern, Black gay men. Johnson—who has adapted his book for the stage as well as a documentary film—will also perform an excerpt from it. To close out the night there will be music from The Illustrious Blacks aka ManchildBlack and Monstah Black, who fuse together "music, dance, theater & fashion" into their DJ sets. 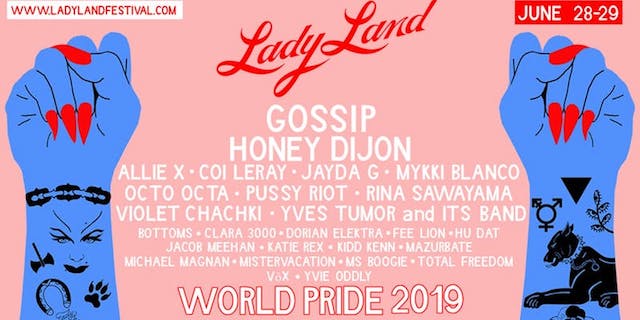 LadyLand is part outdoor queer music festival, part pride party, and part "intimate concert." And this year, for its second iteration, Gossip (!) and Pussy Riot are joining the party. Drop by for hours of DJs, live music, dancing, and, the promise, "good vibes," all in celebration of World Pride.

Close out Pride Month with a brunch at Oscar Wilde, the delightful and eccentric spot that serves everything from booze to a classy little afternoon tea, and yes, brunch. This brunch is a Drag Brunch hosted by Jasmine Rice LaBeija, who will be performing two shows. While there, you can donate $1 and Oscar Wilde will match that donation, which will go to The Trevor Project, a non-profit "focused on suicide prevention efforts among lesbian, gay, bisexual, transgender, and questioning youth." Can't make it on the 29th? Don't worry, they're matching these donations during any brunch for the entire month of June.

With assistance from Dominique Jack

#events guide
#guide
#pride
#pride month
#stonewall 50
#original
Do you know the scoop? Comment below or Send us a Tip