Where Do Bodega Flowers Come From?

The humble bodega flower is one of New York City's most under-appreciated small luxuries. There is perhaps no other city in the country where it's as easy to find a cheap bouquet, but should New Yorkers be suspicious of the roses, chrysanthemums, and carnations sold outside their local bodega? How can they be so cheap when flowers from a florist are so expensive?

The first step to understanding the life cycle of the bodega flower is understanding how these bouquets get to your corner bodega. The majority of bodega flowers in New York City come from cut flower wholesalers, which are based in cheaper areas in and around the city, often near the airports, to allow for ease of distribution and cheaper warehouse space. Metropolitan Wholesale, for example, is located in Saddle Brook, New Jersey, out in Bergen County. Other wholesalers are located in Long Island City or on Long Island.

Surprisingly, Metropolitan Wholesale, like many flower wholesalers, does not specialize in what we might call "cheap garbage flowers." The company imports a wide range of cut flowers and sells to high-end florists, wedding planners, and restaurants, as well as to bodegas and gas stations. The flowers all come from the same sources.

To talk about the origin of cut flowers, we first have to head to the Netherlands, which has been the center of the global industry for centuries. Though the nation boasts both outdoor fields and miles of greenhouses, the Dutch climate is not particularly great for growing the kinds of flowers you'd put in a bouquet. Instead, Dutch laboratories have cemented themselves as the best and most innovative breeders in the world. The highest-end, trendiest flowers—fantastic new colors and shapes—come out of the Netherlands. These are sold in the world's largest floral auction, which takes place in Aalsmeer.

But most of your bodega flowers are coming from somewhere closer. "From my perspective, South America is a great place to buy roses, hydrangeas, baby's breath, chrysanthemums," says Nick Valenti, the owner of Metropolitan Wholesale. "I go to Holland when I want beautiful exquisite lilies, tulips, varieties that you don't see often."

Before the 1970s, the vast majority of flowers sold in the U.S. were domestically grown; Colorado, with its high dry plateaus, was a major producer. But in 1967, a graduate student at Colorado State University published a paper suggesting Colombia as an ideal spot to grow flowers. The area around Bogota, the nation's capital, is on a vast high plain with consistent light and mild temperatures and labor costs were low. 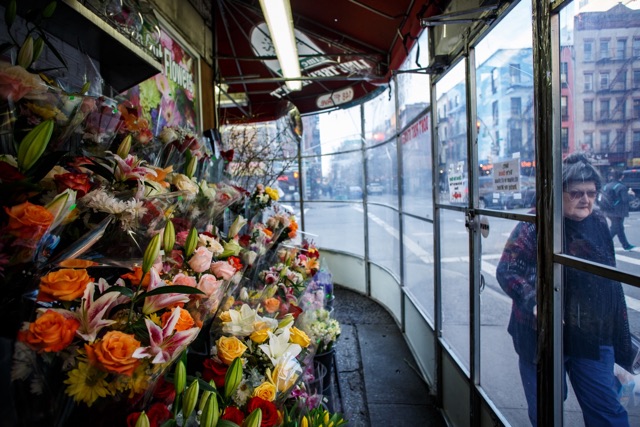 The cut flower industry moved south in droves. Colombians and Ecuadorians began to import seeds and cuttings from the Netherlands, generally growing the cheaper, easier, older varieties in bulk. Your lower-end or mass-market roses, chrysanthemums and even tulips and lilies (generally a bit pricier) mostly come from South America. While the Netherlands is still on top, Colombia is now the second-biggest cut flower exporter. Low freight costs and advanced refrigeration allows for rapid, affordable shipping of cut flowers from thousands of miles away. Those inexpensive bodega flowers—often starting around $5 a bunch—were picked in Colombia or Ecuador no more than a week ago, and probably closer to a few days ago.

Flowers are sold in grades, and the terminology of the grades as well as exactly how they are determined varies based on the specific variety of flower. For roses, the stem length is everything—a 10 centimeter rose will cost you a fraction of the price of a 100 centimeter rose. The length of the stem is often correlated with the size of the flower itself; roses grow with several buds on each stem, so by cutting off other buds and allowing the stem to grow longer, a grower can theoretically get more nutrients to a single flower.

"Something like a carnation, they're sold in grades where you have shorts, probably the lowest grade, then standards, then fancies, then selects," says Valenti. The variables that decide grade for a flower like a carnation would be the length of the stem, the sturdiness of the flower, and the overall size of the flower.

Bodegas are high-volume businesses, so their needs are a bit different. You're unlikely to find especially delicate or niche flowers in a bodega; a bodega florist wants to sell lots of flowers, and likely doesn't have a refrigerator to keep flowers fresh for very long, so it's preferable to get stock in and out the door as fast as possible. But that doesn't mean bodega flowers don't make for a worthy bouquet.

Some of the qualities that make a cut flower valuable in the industry would appear, to the average consumer, quite arbitrary. Is a rose with a shorter stem any less a rose? Of course not, but some higher-end florists will only buy the most expensive grades, even if their customers don't notice or know why their prices are so high. A short-stemmed rose will not, Valenti tells me, wilt any faster than a long-stemmed rose. The grades do not purport to say anything about the amount of time a flower will remain fresh; that solely depends on how long ago the flower was cut and how well it's been stored.

"These products are all coming from the same farms, the same countries, they're being packed the same and shipped the same," says Rebecca Shepherd of Rebecca Shepherd Floral Design in Gowanus. "It's really the hands that they're ending up in, the care that goes into conditioning them, the care that goes into displaying them, the containers they go into, the rent that you're paying, the clientele you're shopping for."

A florist like Shepherd has a cooler and a controlled environment to keep flowers pristine for a longer period; a bodega probably doesn't, and bodega flowers may be exposed to wind, heat, rain, and the grubby hands of prospective buyers.

Bodegas can keep prices down because their overhead is low, and flowers are only one product they sell. Many bodegas don't even own their flower stands. Instead, an independent flower seller will rent or lease the space in front of the shop, which is why sometimes you pay outside. For these independent sellers, costs are far lower than for a retailer who has to rent an actual storefront. And the NYC area's three major airports, as well as its endless appetite for flowers, allow wholesalers like Valenti to ship directly from South America to New York City, keeping wholesale prices low.

It's worth noting that there's a dark side to this flower economy. For all the efficiencies that have been introduced, the industry is still built on cheap labor. Some wholesalers will buy from farms in Colombia or Ecuador with abhorrent human rights records. Many countries have instituted regulations since the mid-1990s to try to crack down on problems like child labor and dangerous pesticide use, but abuses are still commonplace. If you're buying flowers, whether from your corner bodega or a fancy florist, there's a chance their origins are ignoble. 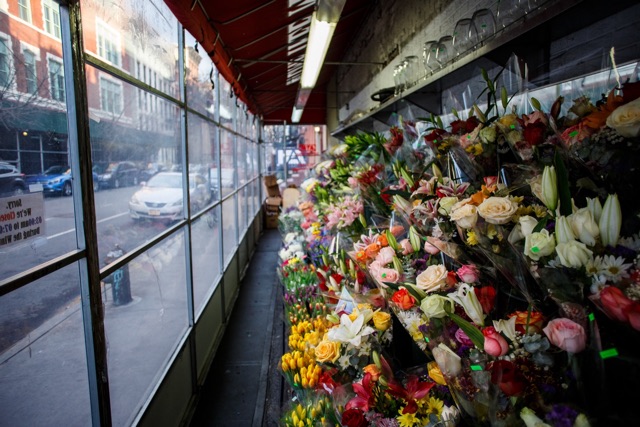 While one of the biggest differences between a bodega and a florist is the selection they're offering, that could be changing. Florists buy their wares at the flower markets—Shepherd, like many florists, goes to the various wholesalers on 28th Street in Manhattan—where they look for unusual, eye-catching, and trendy flowers, as well as specific customer requests. A seasoned florist knows what kinds of expensive or unusual flowers will sell—a hybrid or two-tone, maybe something in unexpected colors like deep burgundy or champagne. While a bodega usually has a standing delivery order for more standard fare, the steady gentrification of New York City into a rich person's playground has had a significant effect on the types and quality of flowers available at bodegas.

"In the last couple of years, everyone is shifting more to higher-quality product and diversity of product," says Valenti. "There's definitely been a huge increase in what people carry, where it used to be just bunches of roses and bunches of chrysanthemums, spider mums, and football mums, now it's alstroemerias, tulips, lilies, all kinds of quality stuff."

Shepherd says she's often impressed by the flower offerings at bodegas. "Sometimes I'm surprised, I'm like, 'Wow, this is really competitively priced,' or 'I'm surprised they have this variety here,'" she says. She has no qualms about picking up flowers from a bodega. "It's interesting because it's all the same," she says. "It's all the same! You get a carnation, it comes from the same farm."

According to Valenti, some bodega flower sellers go around to wholesalers and ask for whatever's cheapest, whatever's been sitting around for a few days longer than it should. Not rejects, exactly, but the lower-end of the cut-flower stock.

But he views bodega flower sellers pretty much the same way he views any of his customers. Some want exotic, pristine, expensive stuff. Some want cheaper stuff. Some want neon-dyed flowers, for some reason. So when you're looking to pick up a bouquet for that special someone this evening, don't turn up your nose at the flowers outside your local bodega. They may be the best deal in the city.