When Shakespeare In The Park Fought Robert Moses, And Won

Trump supporters and other right wing opportunists were up in arms over The Public Theater's staging of Julius Caesar starring a very Trump-like Caesar who is assassinated during the course of the play. And while political theater is making its way onto the stage of... actual theater, this is hardly Shakespeare In The Park's first tangle with a powerful, popular figure. And in some ways, the Public Theater's winning fight to survive against Robert Moses's Parks Department in 1959 is more impressive than stirring up supporters of the President of the United States, if only because Moses was still operating the city as his own private fiefdom.

As the 1959 Shakespeare In The Park season was set to begin, the festival wasn't yet the celebrated cultural institution it is today, but it got some good press. The Times called a 1958 production of Othello "clearly organized and interesting," and also made an appeal to keep the festival going because of the crowds it drew. "Certainly it deserves all the support that is available. For the long, patient line of people hoping to get into an amphitheater that seats 2,300 is a humbling sight for anyone who believes in the theater. And the alert attention of the people who do succeed in getting in chastens anyone familiar with sophisticated theatre audiences. Mr. [Joe] Papp's patrons not only know what they are seeing but believe it. They are free of cant."

The event even had a quiet fan in Moses for a short time, though his opinion of Shakespeare In The Park and the Public Theater would change due to the efforts of one of his chief deputies, the Parks Department Executive Officer Stuart Constable.

In most cases until now, Moses would have held all the cards in the fight, and Shakespeare In The Park would have been a forgotten footnote in city history. However, this particular power play, which Robert Caro referred to in The Power Broker as "The Second Battle of Central Park," came when Moses was in the beginning of his decline in power and prestige in New York.

In the first Battle of Central Park, in 1956, Moses had attempted to pave over a glen to put in a parking lot for the Tavern On The Green, a move he expected to pull off easily. However, he lost the fight for park space to an organized and wealthy group of Central Park West mothers. Beyond actually losing an argument over how city parkland was to be used, Moses's reputation as the man who stuck up for the little guy took a hit, as the park advocates made for a more sympathetic group than his friends who owned the Tavern On The Green.

The second Battle of Central Park started a couple of years later, when Moses went on vacation. While he was out of town the virulently anti-Communist Constable—who Caro wrote "had a sneaking suspicion, based largely on the fact that Papp was Jewish, that the young producer was making money out of the Festival somehow" —found out that Papp had been hauled in front of the House Un-American Activities Committee (HUAC) in 1958 and refused to say whether he or anyone he had known were communists in the past. After that, Constable told Papp that the city would need to be reimbursed for park maintenance costs associated with Shakespeare in the Park and that a free show was out of the question. 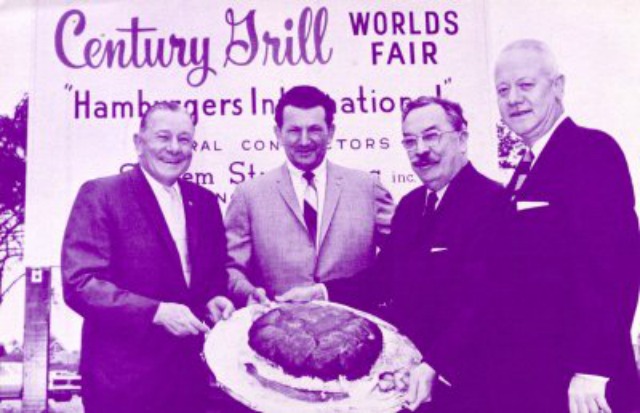 Stuart Constable, second from right and with the mustache, at the groundbreaking of the New York World's Fair's Century Grill. (via nywf64)

Moses, always loyal to his deputies, agreed with Constable when he got back from his vacation, and told Papp the city had to recoup what he said was $100,000 to $150,000 per summer it cost to run the festival. Constable suggested charging a two dollar admission, which was untenable to Papp. Specifically, he said Moses's sudden about-face was "like getting hit in the kishkes," according to Kenneth Turan's oral history of the Public Theater, Free For All: Joe Papp, The Public and the Greatest Theater Story Ever Told.

Papp had previously rejected the idea to charge admission to the plays when theater critic Walter Kerr wrote that he should in 1958, writing back to Kerr that the free plays were as valuable to the city's populace as public libraries: "The only practical means of insuring the permanence of our theater is to tie it in with civic responsibility. The public library, an institution for enlightenment and entertainment, is a case in point. I know that if I had to pay for books at the Williamsburg Public Library, it is doubtful that I would have read the plays of Shakespeare."

Instead of going on the defensive or throwing in the towel, Papp, who became the first person hired back to his job after getting fired because of HUAC testimony, decided to dig in for a fight. He took his case to the press, suggesting his free plays did no more damage to Central Park than anyone did using it for free to play football or baseball or other sports. The glowing reception to Papp's previous productions got the press, long a Moses ally, on Papp's side, with the New York World-Telegram calling the Parks Department head "capriciously unreasonable." Clearly, it was a more eloquent time for New York City editorial pages. 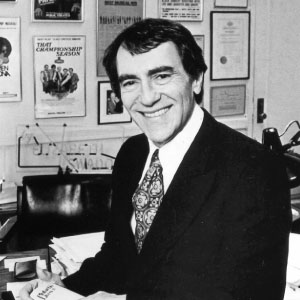 "Thousands of people had already seen the plays in the parks, so there was a lot of consciousness about us. When Moses said he was trying to save the grass, a lot of people came to the fore and began to send him big packs of grass seed," Papp said in Free For All. The public support also came from as high up as Eleanor Roosevelt, who in a column about Moses's essentially cancelling Shakespeare in the Park wrote, "I cannot help wishing that his decision might be changed," according to The Power Broker. (You can read her full piece here.)

Moses fought as well, putting pressure on government officials behind the scenes, and going to his old standby of publicly Red-baiting Papp. Moses also used what he said was an "anonymous" letter that he just happened to find in the mail one day that claimed, with no proof according to Caro, evidence of Papp's communist activities.

The Daily News sided with Moses in an editorial urging Mayor Robert Wagner to support Moses's tactics: "Back Big Bob, Mr. Mayor, Papp has used the smear tactics you'd expect from one who took the Fifth Amendment." The NY Post, meanwhile, blasted the letter as "a reckless assault," and even stood up for Papp and Shakespeare in the Park in verse, in an editorial from May 6, 1959:

My name is Robert Moses, I'm Commissioner of Parks;
On the subject of free Shakespeare I have a few remarks:
If the people of this city want this theater on my grass,
They'll have to pay two bucks a head to get a Moses pass.
Now it is clearly logical that those who disagree
Are probably subversive or at least a threat to me.
That's why I took it on myself to McCarthyize Joe Papp;
Who questions my sagacity gets purged right off the map.

It probably didn't help that Constable asked a reporter "What's wrong with McCarthy?" when a reporter asked about Moses's McCarthyite tactics.

Papp eventually found some lawyers who helped him sue Moses and the Parks Department. Papp lost in a lower court, where a judge ruled that as Parks Commissioner, Moses called the shots in city parks. But on appeal in the State Appellate Court, Papp scored the one win he would need, as a judge ruled that "no useful park purpose is served" by requiring Papp to charge admission if he didn't want to actually make money from the festival.

While Moses could have appealed that decision, instead he promised Papp that he would have the full support of the Parks Department, and even promised to build what became the Delacorte Theater, where the productions of the plays go on today. Based on his talks with Sid Shapiro, one of Moses's close confidants, Caro suggested that Moses didn't mind losing the Second Battle of Central Park, given that it all started because of the actions of one of his deputies. 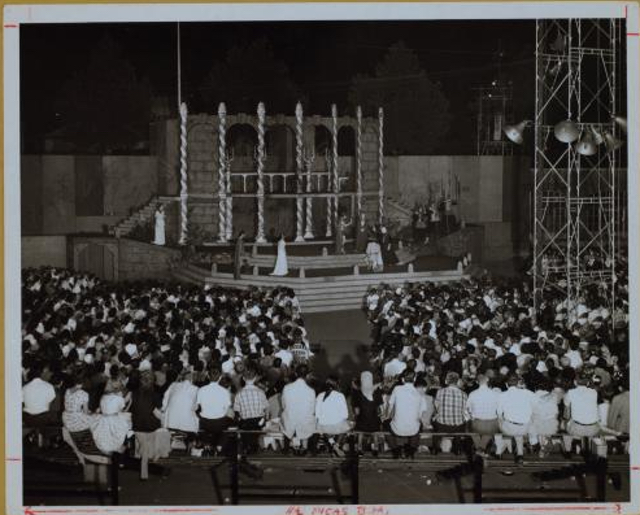 The Delacorte Theater. (Courtesy of the NYPL)

Papp just needed $20,000 in the end, which he wound up getting in the form of two $10,000 checks from a pair of wealthy city residents. And personally, as Caro wrote, the controversy was actually a huge boon for Papp since it made him "the hero of the city's wealthy liberals." Moses's reputation took yet another hit, and would continue to sink as Title I scandals, an over-budget World's Fair, and a final failed feud with Governor Nelson Rockefeller saw him stripped of essentially all of the incredible power that the man who built New York once held.

As for the Shakespeare in the Park festival, they still had time to put on a play for the summer, and chose, as it happens, Julius Caesar ("because it was about power," Papp told Turan). It turned out to be the right choice, as Papp recalled: "Well I went out there on opening night, the place was packed, every seat was taken. I said, 'Ladies and gentlemen-' and I couldn't even get further than that. A roar, a roar.'"

#it's always robert moses
#joe papp
#robert moses
#shakespeare in the park
#original
Do you know the scoop? Comment below or Send us a Tip
A new Gothamist is coming! We’ve moved comments over to our beta site. Click here to join the conversation and get a preview of our new website.