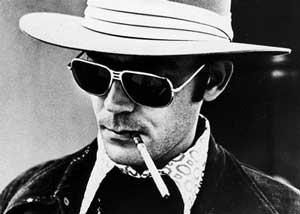 If you're going to get this kind of rejection letter it might as well be penned by Hunter S. Thompson. Rolling Stone should keep this on file to send out to other worthy rejectees. Writer Mike Peterson sent a scan of his rejection to Letters of Note, who have some background—"Written in 1971, at which point young Mike was a resident of South Bend, Indiana, the furious missive was sent in response to a piece of satire he submitted to Rolling Stone magazine; unluckily for him—or luckily, depending on your angle—said piece was forwarded to Hunter for assessment." You can read it in full below:

You worthless, acid-smoking piece of illiterate shit! Don't ever send this kind of brain-damaged swill in here again. If I had the time, I'd come out there and drive a fucking wooden stake into your forehead. Why don't you get a job, germ? Maybe delivering advertising handouts door to door, or taking tickets for a wax museum. You drab South Bend cocksuckers are all the same; like those dope-addled dingbats at the Rolling Stone offices. I'd like to kill those bastards for sending me your piece... and I'd just as soon kill you, too. Jam this morbid drivel up your ass where your readership will better appreciate it.

P.S. Keep up the good work. Have a nice day.

Sort of makes one miss the days of typewritten letters. Now, Mike, it's time to make that submission public!

This was just one of many letters written by Thompson, of course. Another one worth reading is a job application letter, which he wrote from his basement apartment at 57 Perry Street. He was applying to the Vancouver Sun, saying, "Most of my experience has been in sports writing, but I can write everything from warmongering propaganda to learned book reviews. I can work 25 hours a day if necessary, live on any reasonable salary, and don’t give a black damn for job security, office politics, or adverse public relations." Read the full thing here.