When Anchors Hook Up 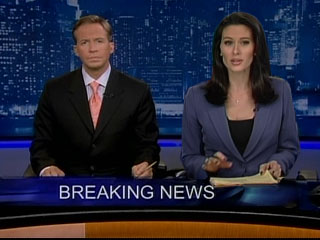 Since the spring, the Post’s Page Six gossip column has for some reason been following the strange saga of the love life of Long Island native and Philadelphia television anchor Alycia Lane, who bears more than a passing resemblance to Liz Cho. It has, of course but it has provided some strange entertainment since May when the tabloid revealed that she had sent e-mails containing private photos of herself to NFL Network anchor Rich Eisen that were discovered by his wife, ABC Sports reporter Suzy Shuster.

Yesterday, Page Six informed us that the twice-divorced Lane, who works for the CBS owned station in Philadelphia, is now linked to WCBS anchor Chris Wragge offering up photos of them walking the same (SAME!) dogs, albeit not together or at the same time or even showing shots to compare dogs. Wragge, as you may or may not know is currently separated and heading towards a divorce from his wife, former Playboy playmate and Swedish Olympian Victoria Silvstedt.

The two anchors are rumored to be traveling together extensively despite a WCBS spokesperson denying the rumors. The Post however got friend-of-Lane and Inside Edition reporter Trish Bergin to say the pair was headed out to the Island, "I've known Alycia and Chris forever. I'm having a bunch of TV friends over for a barbecue. No big deal, though."

The Post even gloats, “The source said Wragge reached out to Lane after reading about her saucy exploits in Page Six.” Now given her 2004 appearance on the Dr. Phil show to talk about her first divorce, we are starting to think that she may be doing these attention grabbing things to get on the national radar, or at least the radar of the number one market.

Photo illustration of Chris Wragge and Alycia Lane by author.