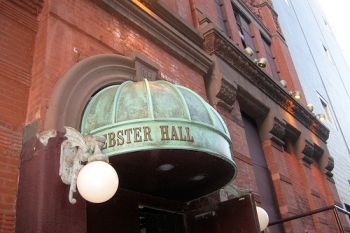 Recently landmarked Webster Hall is undergoing some renovations, building a venue inside the venue called The Studio. The new downstairs performance space will hold around 275 people, and is set to open just in time for CMJ (around October 21st). A venue rep tells us that they plan on having shows "every night of the week" but would like to include a party night on Mondays and a comedy night on Sundays. Don't fear, B&T crew, the club nights upstairs will still go on.

In addition to the new live room, the venue is also building a recording studio from the ground up. Bands will be recorded in Webster's grand ballroom as well as the smaller Studio space downstairs. The Webster folks tell us they "are in talks with the great folks at Best Buy who are interested in selling these recording at their stores." Big Business won't be taking all the cash from the sales however, they promise a 50/50 split with the bands and say the idea was implemented to help them. The venue also says there will also be a free two-camera video shoot of the shows that the band's will have full rights to.

Currently, the downstairs is undergoing major renovations, and hopefully when the new space is unveiled it won't come with an updated marquee that reads Best Buy Hall.