What's Going on at The Hotel Chelsea? 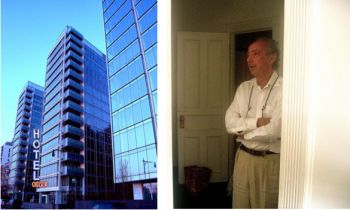 For nearly a year now the Hotel Chelsea residents have been living under the new management of BD Hotels -- and not one has been happy about it. Last summer we checked in with long time manager Stanley Bard (who BD ousted from his position) as well as some of those who call the hotel home...and spirits were low all around.

While the hotel doesn't yet look like our imagined rendering (pictured), changes have taken place (with some mainstays having to leave their digs). So what exactly has been going on in the building this past year?

Ed Hamilton, who keeps a watchful eye on the nooks and crannies of the establishment, will soon shed some light on the past, present and future of the beloved landmark. The Museum of the City of New York is hosting a panel discussion on April 3rd commemorating and celebrating the hotel, giving the public an all access key to information from the inside. Alongside Hamilton, panelists will include preservationist Edward Kirkland and author/Chelsea Hotel historian Sherrill Tippins; with former Chelsea Now editor Lawrence Lerner moderating. Stanley Bard (pictured) will also make an appearance, albeit via video, making rare public statements about his forced retirement and future plans to regain control of the hotel. (If you can't make the big event, Hamilton will be doing a reading tomorrow night at Rapture Cafe.)

#bd hotels
#Chelsea
#ed hamilton
#event
#hotel chelsea
#management
#museum of the city of new york
#stanley bard
Do you know the scoop? Comment below or Send us a Tip