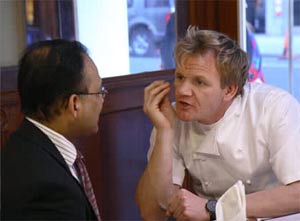 In the show, Ramsay goes to struggling restaurants and whips them back into shape, alternately browbeating, inspiring, turning his nose up in horror, and mucking through rotten food. And this is all within a week! Last week, in the show's second episode, Ramsay traveled to New York City and tried to revamp a confused Midtown eatery named Dillons that offered a menu of cuisines from around the world (even though the chef's background is Indian), a bizarre LED billboard above the awning, three managers and meat in vegetarian dishes. And there were some excellent moments where Ramsay found roaches and rat droppings in the basement. We weren't sure what was scarier, the rodents or Ramsay's wrath!

But the best part is when he took the kitchen staff to the sparkling kitchen of his sleek restaurant, Gordon Ramsay at the London as a lesson in good kitchen hygiene. Cut to a professional team of steam cleaners. Even though Ramsay helped streamline the menu to be more modern Indian and rename it Purnima, it didn't stop one of the managers from trying to sue him, claiming that Ramsay staged much of the restaurant's flaws like a broken chair and rotten food. (A judge dismissed the case, sent it to arbitration and allowed it to air.) Naturally, this was the manager (now fired) who was spied getting his hair stroked by a waitress while resting and chatting on the cellphone during a meal service. Really, it's great - if you missed it, the show is on YouTube in three parts (1, 2, 3).

Tonight Ramsay travels to The Mixing Post in Bellmore to give his tough kitchen love to some Long Islanders. And Kitchen Nightmares is accepting applications to be on the next season of the show.