What You Missed At Brooklyn's Taxidermy Fair This Weekend Yesterday the Morbid Anatomy Museum and Atlas Obscura hosted a rogue taxidermy fair and book release event at the Bell House for Robert Marbury’s Taxidermy Art: A Rogue's Guide to The Work, The Culture, and How To Do It Yourself. Robert is an old friend who I met on my block many years ago when I enthusiastically approached his (late, great) boston Terrier, Punch. In our brief encounter we discovered that we both went to college together, both lived on the same block, and were both attending the taxidermy contest that night in Brooklyn. He would be judging the event, I would be there to meet a pet taxidermist who I thought might be a good fit in my last documentary, FUREVER. Rob and I became friends over the years, though he now lives in Baltimore, so I could not have been more thrilled to have been assigned to cover last night's event.

The evening was an “exposition of fur, feathers, art, and music," featuring live taxidermy demos, and panel discussions, but it also allowed a glimpse at Robert's new book. It’s very well made, designed, and promises to offer a lot of humor and insight with its tutelage. Robert has done a number of hilarious projects over the years—some favorites include this presidential beard collection, these very important and informative patches, and these impressive needlepoints. 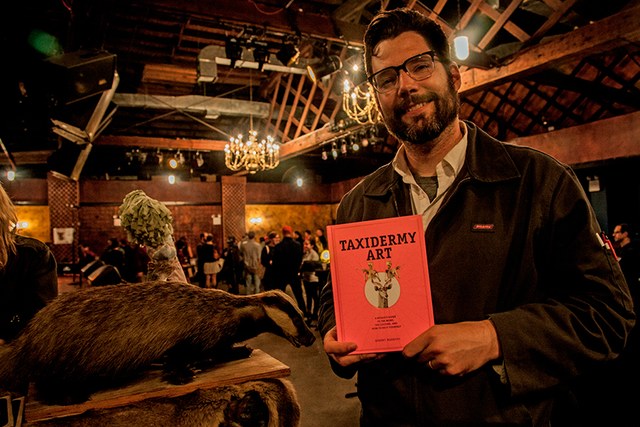 Robert Marbury with his book. (Photo by Amy Finkel/Gothamist)

Along with his own personality, it presents "100 stunning pieces from the most-in-demand artists working in the medium... illustrated how-to lessons to get readers started on their own work, with sources for taxidermy materials and resources for the budding taxidermist." (If you missed out yesterday, Robert will be doing an event and reading in Brooklyn tonight with the Morbid Anatomy Museum.)

While I had heard of a few of the artists in attendance at the event, my work with taxidermists has largely been confined to all things pet-related, and has been almost entirely outside of New York, so I was seeing most of the work for the first time. I was particularly taken by the anthropomorphic taxidermy work of Amber Maykut of Hoarda Culture. Her table was full of interesting oddities including, not only tattooed frogs, beautifully preserved butterflies displayed in bell jars, and larger game mounts, but also elegantly crafted, whimsical scenes of mice doing humanlike activities, delightfully reminiscent of the work of Walter Potter. 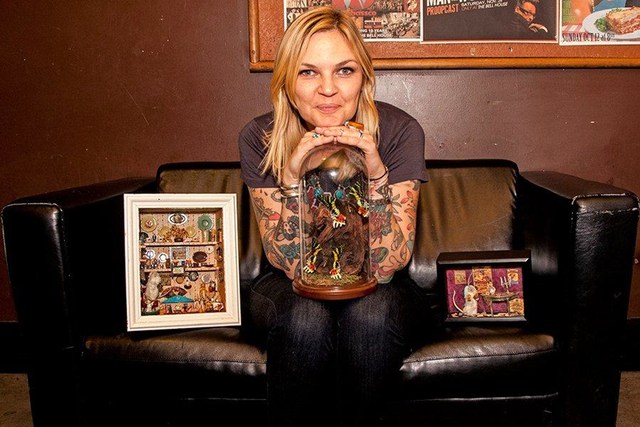 Amber Maykut with some of her taxidermy art. (Photo by Amy Finkel/Gothamist)

Amber is also incredibly friendly and warm, and I was happy to read on her website today that, “None of the animals used to make new taxidermy pieces were killed for the purpose of art. They are either repurposed vintage pieces, utilized roadkill, discarded livestock, destroyed nuisance animals, feeder animals, casualties of the pet trade, or donated animals that died of natural causes.” She also told me that she once made a taxidermy mouse for John Waters (who loved it but didn’t want to touch it), and a mouse wedding couple for Beyonce and Jay Z’s nuptials. 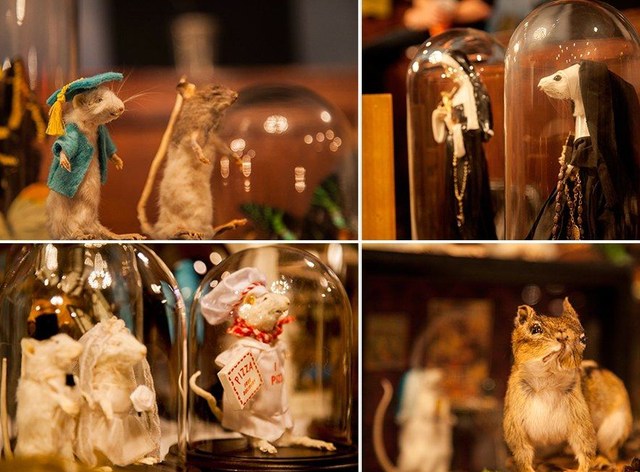 Another artist whose work captivated me was that of Caitlin T. McCormack, who makes crocheted art pieces that bear an uncanny resemblance to the articulated skeletons of the animals they’re meant to portray. It takes her hours to create each piece—“The act of stiffening intricately crocheted cotton string with glue produces material that is structurally similar to delicate bone tissue. The string implemented in this process can be viewed as the basic cellular unit of fabrication, and by utilizing media and practices inherited from my deceased relatives, I aim to generate emblems of my diminishing bloodline, embodied by each organism's skeletal remains.” 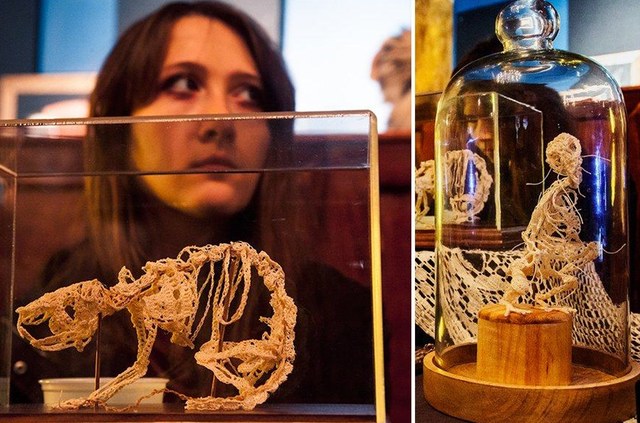 Caitlin T. McCormack and two of her crocheted creations. (Photo by Amy Finkel/Gothamist)

Mike Zohn from Obscura Antiques in the East Village (and the TV show “Oddities”) was another highlight—I’m a big fan of the show and its educational enlightenment. We chatted a bit about a very odd piece he’d brought to the event. I enjoyed the story so much that I decided to record some video of him discussing it:

For more on DIY Taxidermy, check out our very own Lauren Evans's guide to stuffing a sparrow.

Amy Finkel is an award-winning documentary filmmaker, designer, photographer, and writer. She is an instructor at both NYU and Parsons The New School for Design, where she teaches classes in photography, documentary filmmaking, and web design. A native of Seattle, Amy lives in Brooklyn and is currently working on funding a feature length documentary about rehabilitation in prisons.

#amy finkel
#Robert Marbury
#taxidermy
#original
Do you know the scoop? Comment below or Send us a Tip