So far, 2019 has been a pretty great year for brand new comedy series across a wide-range of styles and tones: there's Russian Doll, which mixed time-loops and existential crises with an insider's perspective at life in lower Manhattan. There's the manic, surreal sketch comedy of the utterly idiosyncratic I Think You Should Leave. There's the cathartic middle school raunch of Pen15, the empathetic comedy of Shrill, and Ramy, an intimate look at life as a Muslim-American millennial. And one of the best of this new class of comedies is What We Do In The Shadows, which aired its best episode yet last night—which also happened to be a star-studded summit of cinematic vampires.

Some SPOILERS for the latest episode of What We Do In The Shadows below...if you happen to be bothered by spoilers for a 20 minute weekly comedy series? Which I guess some people are? 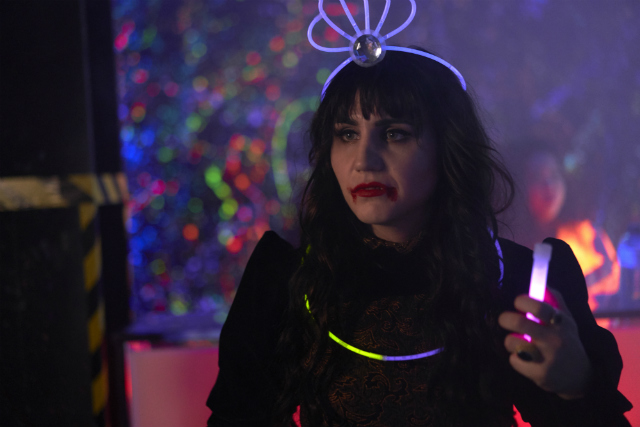 The show, created by Thor: Ragnarok director Taika Waititi and Flight Of The Conchords comedian Jemaine Clement, is based on the absolutely hilarious 2014 mockumentary about three vampire roommates living in modern times; the TV series moves the story from New Zealand to Staten Island, but retains the same sensibility as the original. It also includes an all-new cast, including new vampire roommates (Matt Berry, Kayvan Novak and standout Natasia Demetriou) and new forms of vampires (Mark Proksch plays the energy vampire Colin Robinson, Vanessa Bayer guest stars as an emotional vampire).

In last week's episode, The Baron—an ancient vampire who appeared in the pilot and was hellbent on taking over America, to his vampire roommates chagrin—was accidentally killed after a night out on the town with the main characters. In last night's episode, "The Trial," the vampire roommates were brought before a tribunal of international vampires to decide whether they killed The Baron or not—they all ingested drug-infused blood, which explains why no one can remember exactly what happened except for their familiar, Guillermo (who was the one who accidentally did the deed by opening the door during daytime).

There were cameos galore: first we got fellow Flight Of The Conchords alum Kristen Schaal as the tribunal's misleading messenger (who is very conscious of fire codes: "There’s no way we could have fire. The fire marshals would have a fit") and Dave Bautista (Guardians Of The Galaxy) as a vampire wrongly imprisoned for "turning" a baby. And then came the tribunal, which had the best possible twist: it was filled exclusively with actors who are famous for playing vampires (and they mostly were identified by their real first names).

That included the three original vampires from the What We Do In The Shadows mockumentary—Waititi (who also directed this episode), Clement (who wrote it) and Jonny Brugh—and Tilda Swinton (who played a vampire in Only Lovers Left Alive ), Evan Rachel Woods (who was vampire queen Sophie-Anne Leclerq in True Blood), Danny Trejo (vampire in From Dusk ’Til Dawn), Paul Reubens (vampire in the 1992 Buffy The Vampire Slayer movie), and best of all, Wesley Snipes as Blade (who calls in via Skype).

In an interview with EW, Waititi and Clement discussed how this all came together: "I’d been to SXSW with [the movie version of] What We Do in the Shadows, and Tilda Swinton was there [with Only Lovers Left Alive], and our films were playing almost together, two vampire films. She said, 'Do something where our vampire characters are together.' I just locked that away in my brain. So I thought, well, maybe a whole lot of vampires from different places have come together for some reason, and then just to tie it into the story line that we had," explained Clement. 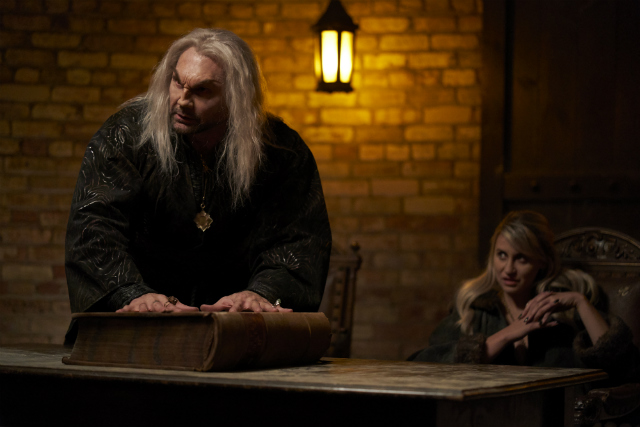 They started with Swinton since "it was kind of her idea," then made a massive list of famous people who had played vampires in TV and movies and started reaching out to their publicists. And they incorporated some of the vampires who weren't able (or weren't asked) to do the episode into the dialogue: "There were more people who didn’t make it. Like we’re saying in the scene [laughs], some people don’t want to do that anymore. Some of those things were true when we were improvising, like, 'He was busy,' 'He didn’t want to do it,'" said Waititi.

I remember Kiefer Sutherland passed. Brad, we talked to his people and they were very open to it, but by then we were so full up with vampires, we never really followed up. Which is kind of rude of us, and maybe a mistake. But that’s saved something for season 2. And Tom, I don’t even think we tried. It was one of those things where we went out to a lot of people, and once we got the people that we had, we were very happy with it. There were a few people who did want to do it, and then scheduling-wise it just didn’t work out. I can’t remember if [Pattinson] was one of them. I do remember Alexander Skarsgård was really very open to doing it, but he was in Australia at the time. We almost sent someone to Australia to try to shoot him, but the schedule didn’t work out.

And Cate Blanchett, who has never played a vampire, almost made the cut, as Waititi explained:

This would all be incredibly fun stunt casting if that is all it was, but the episode itself was hilarious and actually used each guest star well, giving them at least one or two funny moments. If you want to learn more about Wesley Snipes' approach to wearing sunglasses, read more here.

#fx
#staten island
#television
#tv
#vampires
#what we do in the shadows
Do you know the scoop? Comment below or Send us a Tip