What To Do With Michael Vick Gear 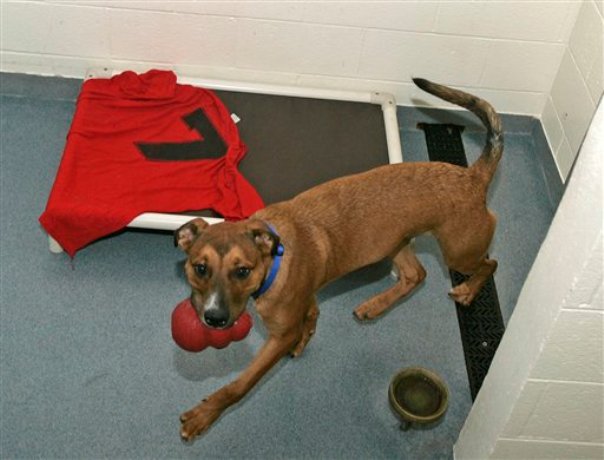 The AP has this great photograph of a dog named Rocky at the Atlanta Humane Society. The Humane Society explained that Rocky had a #7 Michael Vick t-shirt because the society has been taking donated Vick clothing and using them as rags and bedding. Vick, the star quarterback for the Atlanta Falcons, pleaded guilty to federal conspiracy charges related to running a dogfighting ring at his Virginia home.

Vick will appear in court on August 27 to hear what his sentence will be; while some say he will face 12-18 months in prison, U.S. District Judge Henry Hudson has the final say. Apparently Vick's plea "wasn't in line with what he told" the NFL after being initially charged. ESPN reports that the NFL will probably suspend indefinitely. The Falcons' released a brief statement, saying that they are awaiting not only Vick's next court appearance but also a decision from the NFL.

One of Vick's lawyers, Billy Martin, told the NY Times, "Michael is in the process of trying to heal himself and his family. We understand Judge Hudson has the matter in his hands, and we are hopeful that he will allow him to continue to do the only profession he knows and give him a second chance to come back into the N.F.L.” Given Vick's talent, we bet there will be a team who will give him a chance to play - unless, of course, the NFL gives him a lifetime suspension.

ESPN has a Q&A that explains some details about the plea and investigation. PETA wants the NFL to add animal cruelty to its player conduct policy. And you can send the prosecutors a thank-you card for their work, via the Humane Society