What To Do This Weekend: Jenny Scheinman At Village Vanguard, Pig Island, Moth Story Slam, And More!

Esteemed jazz violinist and composer Jenny Scheinman performs songs from her vast catalog of original music at the Village Vanguard through Sunday. Scheinman's credits span a wide variety of genres, including noted collaborations with Lucinda Williams, Bono, Lou Reed and Metallica, and her music can often be heard gracing the air waves of NPR. In March she released her 6th studio album, Mischief & Mayhem, adding to her already impressive collection of solo and collaborative albums and live releases.

Scheinman made her Village Vanguard debut in 2008 (listen to NPR's free online archive of the show here) and now she's back with the same quartet that includes Jason Moran on piano, Greg Cohen on bass and Rudy Royston on drums. Expect to hear a bulk of tunes from her album Crossing The Field, which Scheinman composed for Moran, as well as selections from Shalagaster. The group may also perform some unreleased material. General Admission tickets are available for $25 through the venue.

Also this weekend (in addition to the epic-sounding "Laboratory" party in the old Williamsburg Pfizer plant on Saturday night):

The Porkocalypse rains down upon Governor's Island once again as the isle transforms into Pig Island this Saturday. City chefs exhibit their porcine prowess with 80 locally-sourced hogs, putting on butchering and cooking demonstrations and creating pig-centric dishes for you to gobble up. This year, chefs Dale Talde, Joe Dobias, Jimmy Carbone, Michael Ferraro and others are on hand and a Veggie Pavillion by Cathry Erway will be available for the meatless set. Included in your ticket price is unlimited Sixpoint beer, as well as wine and cider from upstate. 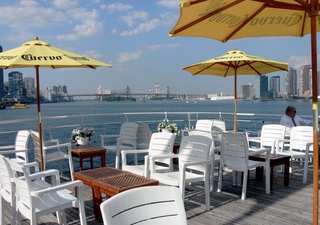 Few things encapsulate the flavors of summer more than an old-fashioned clambake, and this weekend is the perfect time to enjoy one as we say farewell to the season. Chef Aaron Bashy of The Water Club has created a special clambake to feast upon as you take in the stunning views of the East River from the restaurant. Fill up on 1/2 lobster, fillet of cod, cherrystone clams, scallops, corn, sweet carrots and potatoes for $38—not bad, especially considering that the servers de-shell your lobster for you tableside. After you've stuffed yourself, head upstairs to The Crow's Nest, the open-air riverfront bar above the restaurant for a refreshing Pina Colada. Both the restaurant and bar will be closed Labor Day Monday, but the special clambake remains on the menu through September.

If you've never been to Moth StorySLAM storytelling event before, this Labor Day Monday is as good a time as any, when The Bell House in Brooklyn plays host to one of the ongoing events. Here's how it works: after you pay an $8 entry, either sign up to tell your story, angle to get picked as a judge by a Moth staffer, or just choose a seat. Ten people will be chosen at random to tell a five-minute, prepared and practiced true story based on the theme of "collaboration." Each story will be judged by staying inside the time frame, sticking to theme, and overall story arc, with one story declared the best. Doors open at 7:30pm, stories begin at 8pm.