What To Do This Weekend: Afropunk Festival, Dip A Chip Showdown, 236th Anniversary of the Battle of Brooklyn

"I would see more black people with mohawks than I'd ever seen my entire life. You see people who you thought you were the only one of," said P.O.S., a musician, about the Afro-Punk Festival. Now in its eighth year, the free event is returning stronger than ever this weekend after getting washed out by Hurricane Irene last year. The lineup looks incredible, from headliners Erykah Badu, TV on the Radio and Reggie Watts to Toro y Moi and Das Racist.

It's still free and still in Commodore Barry Park by the Brooklyn Navy Yard, and a variety of attractions will be conspiring to keep you from leaving the fest. More than 80 local vendors and artisans will be showing off their wares at the "Afropunk Spin Thrift Market," and 15 food trucks will be parked on Navy Street between Park Ave & Flushing Ave, slinging a variety of treats, including fresh juices, Korean food, pizza, and slushies. An art wall will be in progress and twelve spectacular custom bikes will be on display, being judged as "the best bagger, chopper, bobber, paint and the top award of Best in Show." There will even be a skating competition, though you'll have to sign and bring this waiver to participate. Even if you're not into this stuff, check out the music: there's something for everybody!

Are you a Guacamole Great? A Salsa Spectacular? See if your dip can surpass the rest at The Dip A Chip Showdown Sunday afternoon, 3 p.m., at Noorman's Kil in Williamsburg. Dip Masters can present their hip dip to a panel of judges for the chance to win prizes and the admiration of adoring dip devotees. Official Guac and Salsa Masters must email Andrew by 5 p.m. Friday 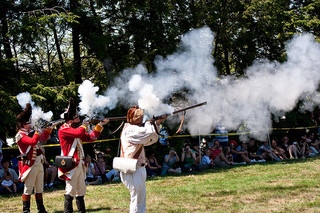 236 years ago, the Revolutionary War raged right here in our fair city, on land that now houses Green-Wood Cemetery. In August of 1776, The Battle of Brooklyn became the first battle of the American Revolution to be fought after the signing of the Declaration of Independence, ensuring that generations of Brooklynites could enjoy their artisanal mayo free from tyranny. To honor the soldiers who fought for our freedom, Green-Wood Cemetery will host a slew of free activities and ceremonies on the storied ground.

Starting Sunday at 12:30 p.m., watch Revolutionary War Re-Enactors play out the battle with muskets and canons. Then at 1:30 p.m., the Battle of Brooklyn Parade marches through the cemetery with accompaniment provided by The Regimental Ban of the United States Merchant Marine Academy. The day concludes with the Battle of Brooklyn Commemorative Ceremony in memory of the brave patriots who made the ultimate sacrifice.