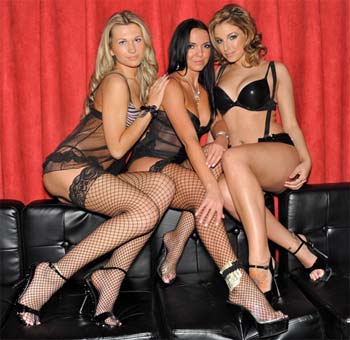 Rick's Cabaret, the "upscale gentlemen's club," which has numerous locations across the country, including one near Penn Station, has announced it's opening another venue in New York City. And it'll be near the sanitized Times Square!

Rick's Cabaret announced that it bought an adult book and novelty store for $3 million (half in cash, half in stock) and will revamp it as another temple of ogling.

CEO Eric Langan said, "It is virtually impossible to find an appropriate location for an adult club in midtown Manhattan, so we are very fortunate that we have secured this rare site. It is close to Times Square, numerous hotels and businesses, and is ideal for the kind of upscale club we operate." Seriously, it is SO GLAMOROUS:

Rick's won't reveal exactly where this rare location will be, but if all goes according to their plan, the new location will open in a year. Last week, the Wall Street Journal chatted with Rick's Cabaret's communications officer to discuss how Wall Street bankers and traders love strip club: Allan Priaulx bragged that there have been "sequential gains" month over month at the Penn Station location in spite of the downturn, "We have a really solid base of Wall Street customers. Most of them pay on their personal credit cards, unless it's a legitimate company expense and then they use their corporate cards." Yeah, and bankers are probably classier customers than Columbia kids.