What It's Like To Spend The Night At Citi Field

This past weekend, Citi Field hosted its 2nd Annual Sleepover, in which rabid baseball fans were given the rare opportunity not only to doze on the borough's most picturesque grass, but toss the ball, rub elbows with Mr. and Mrs. Met, and take fistfuls of selfies with the dugout phones—all on the same hallowed turf as the players play.

For $200, your very cheek could rest on the same storybook-perfect patch of grass on which Chris Young stood when he rocketed the ball back to first that one time. How often do they sanitize those phones, anyway, and could our own excitement-flushed faces really be mingling with the sweat and spittle spewed furiously forth by Terry Collins during so many fervent calls to the bullpen? Is that Carlos Torres' dried blood still splattered on the back wall? We'll have to inspect the selfie footage.

Indeed, the sleepover is a dream come true for any child or adult child with even a passing interest in America's most beloved sport—that is, a dream for adult children content to spend an entire Saturday night deprived of alcohol. Yes Virginia, the sleepover is drier than an Arizona summer, drier than the esophagus of Lucas Duda after the 32nd hour spent hovering over the toilet following his ill-fated run-in with Shake Shack. Worse, you can actually see the beer you're not drinking, trapped behind the impenetrable walls of their cool glass prisons.

Only a miniature padlock separated attendees from a full complement of craft beers typically served in the stadium's FanFest area—ideas bandied for infiltration were: Bribing Citi Field employees, or smashing the dainty locks in the dead of night, neither of which came to pass. By the time I was done stuffing myself full of pizza, hotdogs, ice cream, and what must have been 15 pounds (gallons?) of donuts-chased-with-milk slurry, fatigue had gripped me fully. Lacking the staying power of even the smallest toddler in attendance, I was content to slip into oblivion inside my sleeping bag on the outfield, with nothing— not the lights nor the muffled booms of Angels In the Outfield, the featured film—making so much as a cameo appearance in my serene dreams. I stirred only when it began to rain around 4:30 a.m., but what was a little rain compared to the luxurious embrace of 120,000 blade-count Egyptian sod? 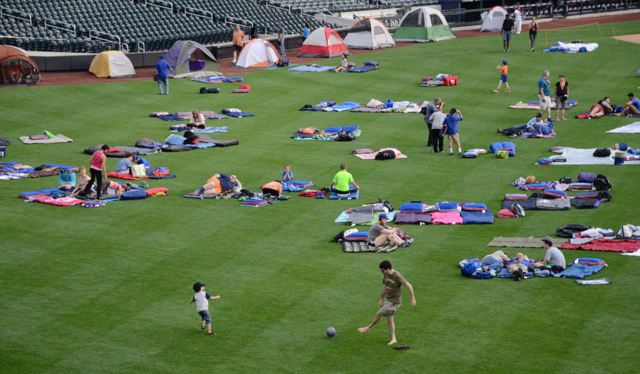 Wake up arrived at 6 a.m. sharp. Did you know that after the threat of Cold War diminished, all of the country's civil defense sirens were housed at Citi Field, for the express purpose of scaring the shit out of slumbering sleepover attendees? If I were the type of the person to own a gun, I would 100 percent have started shooting the moment the blaring cacophony of chimes, bells and throaty commands to WAKE UP punctured my peaceful doze. As it was, I expressed my displeasure with a fit of startled flailing and inaudible, snarled threats to "write about this," directed to nobody in particular. It became clear at this moment why no alcohol was served—I would have vomited on the field out of sheer spite.

After eventually processing their own early wake-up traumas, bleary campers rubbed their eyes, gathered their tents and proceeded back to FanFest, where stimulants were finally awarded in the form of Dunkin' Donuts coffee. I consumed another 600-odd donuts holes before waddling back to the car, bloated and sleepy and somehow still full of milk. Was I mad that I couldn't have any beer? Sure. Did I lose 30 percent of my hearing during the morning's Wake Up Blitzkrieg? Undoubtedly! Will I go back next year and do it again? Absolutely.

#citi field
#citi field sleepover
#mets
Do you know the scoop? Comment below or Send us a Tip