What It Looks Like To Circumnavigate Manhattan By Bike, In 14 Minutes

Artist Jesse Kaminsky has a yearly tradition of riding his bike full circle around the island of Manhattan, and this year he decided to make a time-lapse video documenting the journey with a few friends. In the spirit of this time-lapse video covering a ride from the Bronx down Broadway to the bottom of Manhattan, Kaminsky's video offers a hip-level look at what must have been an exhausting odyssey. He says one of his favorite moments happened at the 12:40 mark, when he pauses to enjoy a DIY video shoot for a hip hop video:

The ride took about six hours, including breaks and a flat tire fix along the way. "We got a little off track on the East side above 125th street, partially because the bike path disappears and partially because we were looking for a bathroom," Kaminsky says. "So we weren't able to ride along the coast the whole time. We did get to the Spuyten Duyvil creek area but didn't bike the trails in Inwood Hill Park like we did last year. That's the true northernmost point on the island. We didn't use a map, kind of winged it a little, though the path is pretty well established for most of the trip."

Here's a map of Kaminsky's route (in blue). And for the record, he tells us, "I don't endorse riding on the sidewalk, even though the evidence might suggest otherwise... One of the problems with this type of documentation is that the camera doesn't discern between walking and riding on the sidewalk, I was walking through the crowded parts at the southern tip though it looks the same." 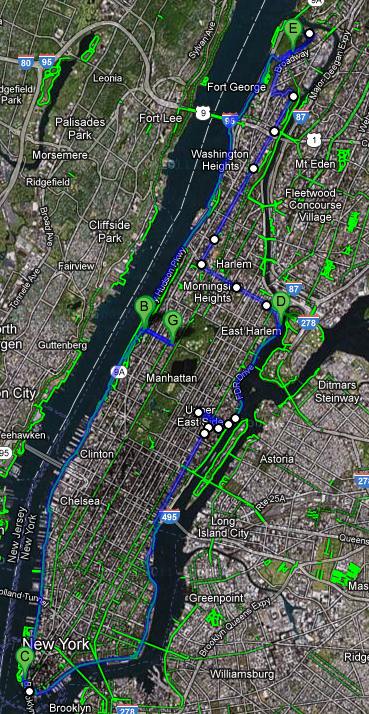 #circumnavigation
#cyclists
Do you know the scoop? Comment below or Send us a Tip