What Is The Future Of Governors Island?

Last week, the city held a public hearing on its plan to reimagine Governors Island as part of an effort to turn the former Coast Guard base into a year-round destination.

Governors Island, located just 800 yards from Lower Manhattan and half that from Brooklyn, features historic landmarked buildings, a newly minted 43-acre park, and scenic views of the city including unrivaled views of the Statue of Liberty. It’s also home to swaths of vacant land in the southern half of the island. There, the city is seeking to unleash its development potential on 4.5 million of square feet to “complement and financially sustain” the park and the island’s operations, according to a City Hall press release from August announcing the plan.

“Our goal here is really to run the best park in New York,” Michael Samuelian, president and CEO of The Trust for Governors Island, a city-controlled not-for-profit, told Gothamist. “It’s not really an economic development program. It’s really about how we become self-sustaining and find sources of income that can help make the park beautiful in perpetuity.”

Samuelian, a former vice president at Related Companies — among the city’s top developers — said the Trust is focused on serving as “stewards for the park,” not merely as real estate developers seeking a return on investment. 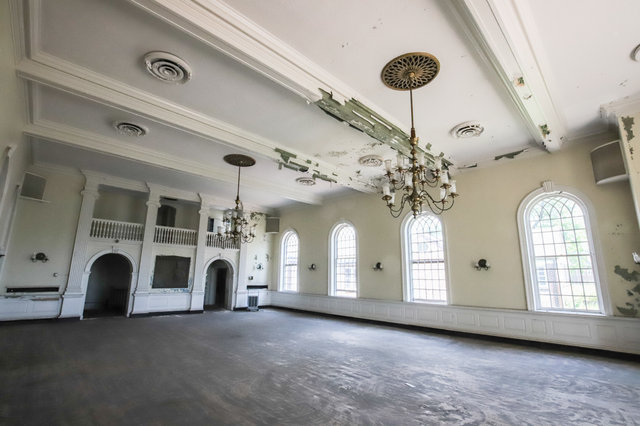 A restaurant could take over the old ballrooms of the Officers' Club. (Sai Mokhtari / Gothamist)

Due to the terms of the 2003 deed by which the city and state took ownership of the land from the federal government, the city is prohibited from building housing, as well as garages, casinos, and manufacturing facilities on the entirety of Governors Island. As a result, the Trust aims to usher in commercial, research and development, offices, cultural space, a convention center, and perhaps even a hotel. But educational space, Samuelian said, is atop the list of priorities for new development.

“You look at it and it just feels like a college campus,” he said of the island, which is currently open to the public for only half the year.

But that vision cannot come to fruition yet. Currently, the southern portion of the Island is zoned R3-2, which permits single-family residences and townhouses, prohibiting the construction of the types of facilities the Trust has in mind. Under the Trust’s proposal, released in August, the South Island would be rezoned to C4-5, or commercial buildings that would rise to a maximum of 300 feet for a dorm or hotel. (300 feet is, not coincidentally, the approximate height of the Statue of Liberty, as the Trust is careful to make sure the new development does not block views of the statue). Office, academic, research and development would be limited to 125 feet, according to a presentation the Trust delivered to the relevant community boards. The plan would go through the ULURP process, a public review process which involves review by the Community Boards, the Borough President, the City Planning Commission, and the City Council.

“In order for us to really complete the vision, we need to rezone the development sites in a manner that’s flexible enough so that we can attract the mix of uses that we think really make sense,” Alicia Glen, deputy mayor for housing and economic development, said Tuesday on a call with Gothamist.

Glen also spoke of the possibility of a convention center, saying, "I think it’s important that we have an interesting convening space, because right now we lack any shazam, drop dead, funky place for convening. I wouldn’t call the Javits Center exactly an inspiring place to do a product launch, or give a talk about astrophysics." 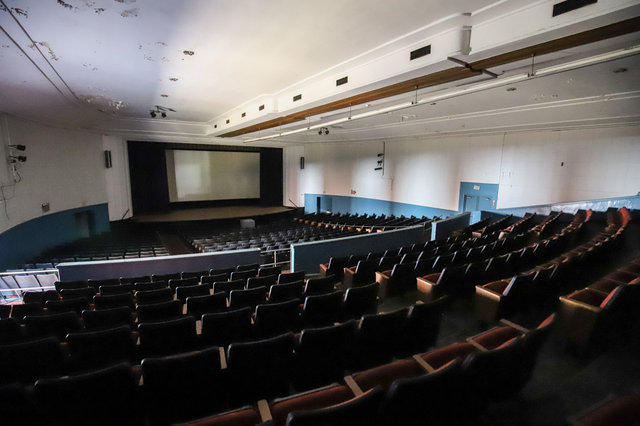 If all goes according to plan, the city’s land use review process, ULURP, will be certified in March 2019. And after the mayor puts the rubber stamp on the rezoning at the tail end of 2020, the city will release an RFP (request for proposal) from developers interested in building on South Island. The city aims to get the island at close to full development capacity in a decade, Glen estimated. The entirety of the North Island’s historic district, notably, does not fall within the scope of the rezoning, and the city and trust plan to preserve the lion’s share of the 52 buildings, with roughly ten of what Samuelian labeled “non-contributing” buildings slated for demolition.

In addition to the potential development on the South Island, the Trust is looking for tenants to repurpose the historic buildings that were in the past predominantly used for housing, which can be executed before the rezoning takes effect. The Trust is also pursuing new features prior to the rezoning, such as investing $10 million in capital funding for new lighting, along with a spa in the pipeline for the historic district, the island’s sole commercial tenant at the moment, slated to open in two years.

Samuelian also sees the island becoming a popular wedding destination, once the developments are completed. (It's also possible to have a wedding on the Island right now.)

“If we have churches and a party space and a hotel, it would be a great place to have a weekend wedding,” he said. 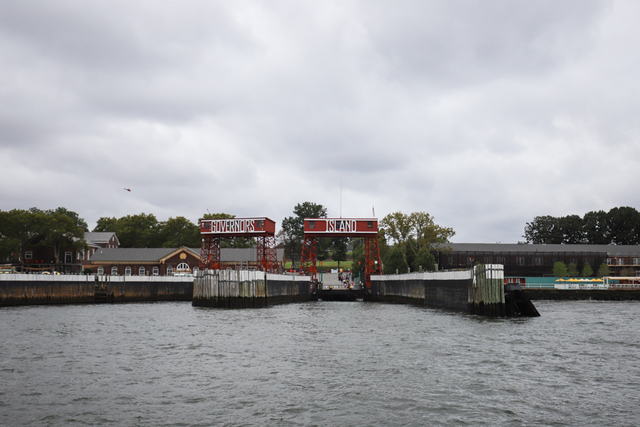 If the Trust and city’s stated projection for what the Governors Island will have in ten years seem disjointed, that's not necessary a flaw, Samuelian said, proudly calling the island “quirky.”

“It’s not this kind of maniacal masterplan, where everything is aligned,” he said. “Manhattan’s a grid. We’re the opposite of that.”

Glen, for her part, spoke to the freedoms the vacant land and absence of permanent residents on the island provides. “It does provide opportunities that are hard to find in other places in the city,” she said.

“Where else,” she continued, “in one of the global capitals of the world, do you have a park that is spectacular as this, where you can also do really smart, sustainable development?”

Get a rare look inside the currently abandoned historic buildings of Governors Island right here.