What Is That? The Towers In the Middle Of The Hudson

The city of New York is filled with mysteries that, when you know what they mean, can really help make a person feel like a real New Yorker. For example? We've been asked a few times over the years what exactly those odd rampart-like towers in the middle of the Hudson River off lower Manhattan are. The answer? Oh, nothing much. Just a feat of engineering that no less than Thomas Edison once thought was impossible. 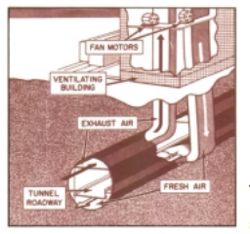 The way the vents work (ASME).

So what are they? Ventilation shafts! Next time you are walking down the Hudson River Greenway, look closer. Not only are there two matching towers in the water, but there are also two more towers on land (one in Manhattan and one in New Jersey). Those four towers together keep car drivers in the Holland Tunnel from asphyxiating on carbon monoxide. In total the four buildings house 84 fans—42 blowing and 42 sucking—which are capable, at full speed, of completely changing the tunnel's air every 90 seconds [PDF].

See, when the Holland Tunnel was the first conceived its length of 1.6 miles made it the longest automobile tunnel ever. And considering how much worse car exhaust was then, people weren't really sure how to keep the air under the hudson clean enough that it didn't just become a giant suicide pit. The solution, transverse-flow ventilation, came from engineer Ole Singstad (who replaced original designer Clifford Milburn Holland). But it had skeptics! So to prove it would work Singstad, with help from Yale and the U. S. Bureau of Mines, put a bunch of students into cars with engines roaring in a custom 400' test tunnel in a Pennsylvania mineshaft. They lived—and so we got those towers! Here's how they work:

And now, the next time somebody asks you what those towers are in the middle of the Hudson, you'll know the answer! If you're curious about other things you see around the city, let us know and we'll do some investigating.

Previously: What are those tanks on the sidewalks?

#holland tunnel
#hudson
#hudson river
#new jersey
#the more you know
#ventilation shafts
#what is that
#wtfnyc
Do you know the scoop? Comment below or Send us a Tip