What If We Turned Central Park Into A Spectacular Sunken Living Room?

It seems like every day, there's yet another proposal for an ever-more outrageous supertall skyscraper—but those all pale in comparison to the latest, which is a purely hypothetical design that just won eVolo magazine's 2016 Skyscraper Architectural Competition.

At first glance, that winning design appears to propose a giant glass wall encasing a version of Central Park that bears virtually no resemblance to Frederick Olmsted's brainchild: it's filled with mountains and lakes, and, if you look closely enough, there are a couple rogue mountains to the west, north, and southeast of the park.

But New York Horizon is a bit more complicated than that. This whole thing is underground—designers Yitan Sun and Jianshi Wu, both recent graduates of the Rhode Island School of Design, envision digging down 1,000 feet, creating a structure that would top out at street level, facing the newly created cliff on one side and the drastically reimagined park on the other. Elevators at street level would carry people down to the park, as well as to various floors of the seven-mile-perimeter wraparound building, which the designers suggest would contain apartments, museums, convention centers, and the like. The soil dislodged from the park could create new hilly structures around the city, allowing for better views of the park and surrounding landscape.

Of course, this is pure fantasy, and more an experiment in design than anything else. EVolo certainly seems to value creativity over realism, as the runner up in this year's competition is a towering drone docking station in place of 432 Park Avenue, and past winners have proposed turning the Hoover Dam into a residential skyscraper, or erecting a massive umbrella to protect the polar icecaps.

"Though it might not be built any time soon, it does provide an opportunity for us to look at the relationship between landscape and architecture differently," Wu told us. Sun added: "As New Yorkers, we really appreciate Central Park and the city. And we really would like to take a bold step to change the city into a better place to live." While it's unlikely this particular vision will be realized, Sun said, they hope that it might inspire future architects to think about creative ways to integrate buildings and landscape. 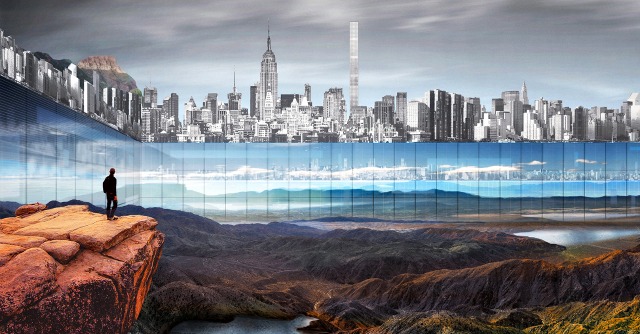 Man contemplates all of the potential lawsuits this design would bring upon the city. (Yitan Sun and Jianshi Wu)

Wu and Sun moved to New York last year, and found themselves frustrated by the lack of inhabitable space close to nature in the city. They both work at architecture firms in Brooklyn and live near Central Park, and, in conceiving this project, were trying to think how they could make the park an even more dramatic landmark in the city. Though it's not mentioned in their project description, they say they imagine that certain structures and elements of the park would be preserved—for example, the walls that form the perimeter of the park today might act as a protective barrier to keep people from falling over the edge of the building and into the pitted park.

The two designers are adamant that their design is not proposing a wall, despite how the building appears in the rendering.

"A lot of people misunderstood our project as a monstrous wall," Wu said. "What we want to build is connection, not separation. We would love to stir up the conversation about the definition of the skyscraper and its relationship with landscape. Building a wall was never our intention, at all."

On a scale of 1 to awful, this is right up there with getting rid of Central Park altogether.

#architecture
#central park
#design
#rendering
#skyscrapers
Do you know the scoop? Comment below or Send us a Tip