What If Broadway Was One Long, Lush Green Park?

Some beautiful dreamer thinks that Big Automobile will yield one of Manhattan's biggest thoroughfares to pedestrians, LOL. But maybe if we all dream really really hard and clap and clap and clap then it can come true? Just stare at this rendering of the iconic Broadway converted into a lush green park and will it into reality. 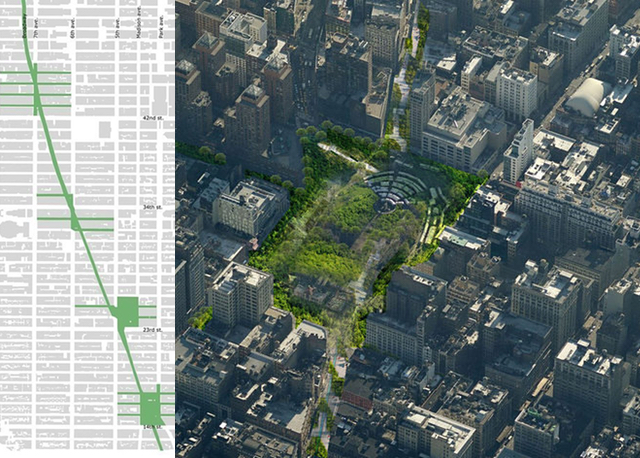 The idea comes from Perkins Eastman Architects who are calling this the Green Line, which would run from Columbus Circle to Union Square, along the way connecting with Madison, Herald and Times Square. From the firm's Facebook page, this utopian vision:

Imagine Manhattan's Broadway as a pedestrian-focused green space, stretching from Columbus Circle down to Union Square, and possibly beyond. Further, imagine all cities in the not-so-distant future, far less crowded by automobiles, cleaner, more efficient and more sustainable.

Yes, just imagine! It would be a stretch with no cars, no trucks, no busses... though emergency vehicles would be permitted when necessary, according to Dezeen. Jonathan Cohn, of Perkins Eastman, told them, "Recognizing that green public space is at a premium in the city, and proximity to it is perhaps the best single indicator of value in real estate, the Green Line proposes a new green recreational space that is totally integrated with the form of the city. As a linear at-grade park, the Green Line would provide much needed active and passive recreational space in the heart of the city." 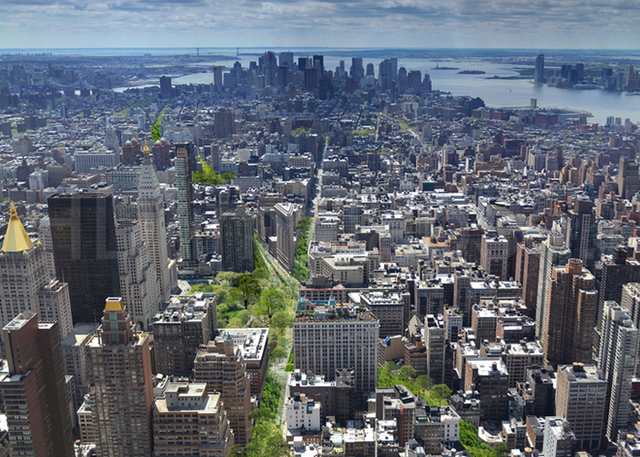 Cohn also believes it would protect Manhattan from flooding, in some cases, since Broadway is an important marker "in the city's overburdened stormwater drainage system... Rather than allowing stormwater to enter the underground sewer system, where during heavy rain and snow storms it combines with untreated wastewater and discharges directly into the city's waterways, much of the rainwater could be allowed to percolate directly into the earth." Beautiful.

#broadway
#green line
#pedestrian plaza
#rendering
Do you know the scoop? Comment below or Send us a Tip