What Happens When You Try To Fly A Kite In Midtown

New York City streets can act as great wind tunnels. The iconic wind these streets produce is arguably the best wind in the country, as it comes from the center of the universe and contains magic powers that some say is produced by the city's frustration at the subway system, along with its water: the same secret ingredient in our superior bagels. It is so powerful that it has been known to blow up skirts, lift hats off the tops of heads, alter the direction of pigeons in flight, and really mess up your hair.

Some say our wind is actually what creates the Santa Ana winds.

When the wind here is in a kind mood, which is rare, it has been known to blow the personal item of one New Yorker into the hands of another, creating a "meet cute" that Nora Ephron seems to have penned from above. More commonly, however, the winds—often aided by garbage trucks—will rip your soulmate's phone number from your bare hands. And on the average day, our wind is a cruel wind. It doesn't want you to succeed.

So if you want to do something carefree like fly a kite in the street while other people are trying to get on with their day, it will disappoint you. It will flat out embarrass you. It will make you give up on life, at least in that moment. It will cease to exist, using a limp breath to whisper in your ear: "Bring the kite to Central Park," before howling: "NOW GET OUTTA HERE WITH THAT THING YOU SCHLEMIEL!"

These two gentlemen were the latest to be shamed by the city's wind—just this morning around 11 a.m., Rich Docherty captured them around 8th Avenue and 38th Street trying to fly the kite via foot, before attempting it on bike. Both approaches failed. Rich tells us, "These aeronautical geniuses thought better of their Midtown kite launch so they aborted quickly, and lasted about as long as Wilbur and Orville's first Kitty Hawk flight back in 1903... which, for the record, was 12 seconds." But boy, did they fail beautifully. 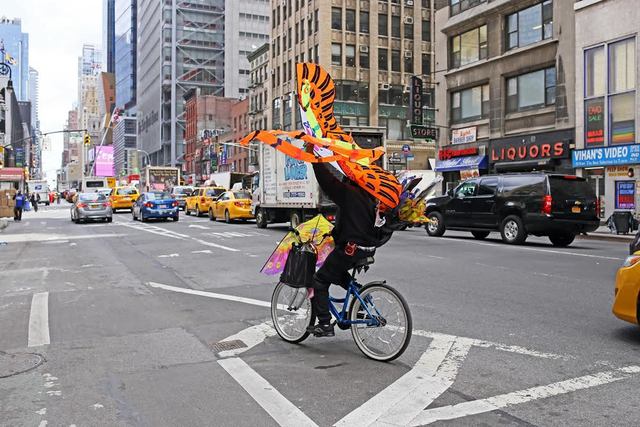