What Happens When A Scary Foreign Spider Creeps Into Your Suitcase?

Nearly 25 years ago, Popular Culture taught us that unwittingly smuggling a mysterious spider into the United States tends to unleash a plague of venomous arachnids, mass casualties, and heroic behavior from Will McAvoy. But what happens when you accidentally transport a suspicious-looking spidey from your overseas travel IRL? Will Aragog's children try to eat you alive, or will they simply spin cool words in their webs?

Abigail, a Crown Heights resident who recently returned from Indonesia, posed one such question to us today, after happening upon a spooky-looking spider corpse (pictured above) in her luggage. She writes:

I know it sounds like the beginning sequence of Arachnophobia, but I'm genuinely afraid that I have inadvertently brought a potentially poisonous spider back to NYC from Southeast Asia. Fortunately for everyone, it's dead. My guess is the sub-zero temperatures on the 7-hour flight from Jakarta to Seoul or the 12 hour flight from Seoul to JFK did him in, which begs the question: how did that spider in Arachnophobia survive the trip from the Amazon or wherever, but we'll let that slide.

Anyway, my boyfriend and I were in Southern Lombok, Indonesia when we came back to a fairly large spider in our room. It crawled under the bed and we had to forget about it, because we were in the tropics and there are all sorts of things crawling around and we didn't want to be wusses. And yet here I am, nearly 10,000 miles away in Crown Heights about to head to the laundromat across the street only to discover this thing curled up in my boyfriend's suitcase! It was literally hiding under our Indonesia guidebook (I'm not making this up). And to top it off - it has some sort of egg sac that has separated from the body but hasn't opened. I have yet to discover any baby spiders elsewhere in the suitcase.

I know this isn't breaking news but I am curious if I should save this thing and send it to an Entomologist or something. Or should I just flush it down the toilet? For now it's in a ziplock bag in my freezer.

So, according to our brave tipster, not only has a (now dead :( ) spider hitchhiked all the way from Southeast Asia, but she's potentially brought a sac full of eight-legged babies with her. This isn't the first time Brooklyn's been threatened with a (fake) invasion. But is the borough about to be eaten by arachnids? What is this creature, and do we have anything/everything to fear?

In case you've forgotten, the spider looks like this: 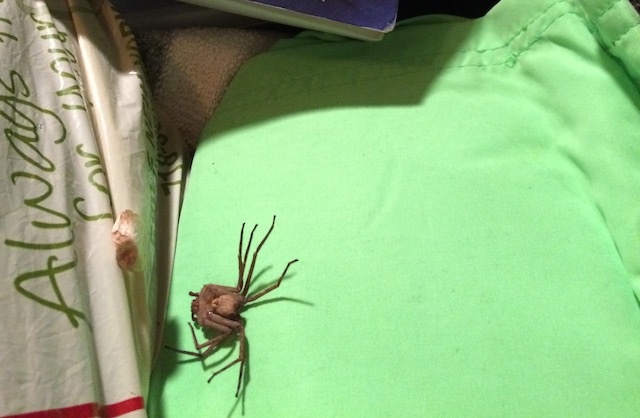 We reached out to Louis Sorkin, the American Museum of Natural History's resident entomologist, who claims our lives are not at risk. The deceased female spider at hand hails from the Sparassidae family, and is commonly known as a "giant crab spider,"—the species is not dangerous, is "quite docile and happens to consume cockroaches," making it a Hero Spider in a city full of disgusting house pests. Sorkin also noted that the species "makes a good pet," so even if all the mini-Spideys hatched, Abigail would simply get a house full of unpaid exterminators.

Here's a video of a similar little bugger hanging out in an Indonesian bathroom:

But what should Abigail do with the spider corpse and its babies? If she throws it in the trash she's going to be looking over her shoulder for the rest of her life, wondering if it was just playing dead until it could crawl to freedom and hunt her down in the night. One of Chris Robbins's friends happens to be studying entomology at Virginia Tech. In an email, he writes:

Transporting dead arthropods internationally generally isn't a big deal, or even illegal (sorry, I know you probably want a story here). First, a couple snobby remarks: spiders are venomous, not poisonous; almost all spiders are venomous. Now that's out of the way, I would recommend taking it out of you freezer and slowly warming it up to bring it back to life. Then you will have a fucking story. If that doesn't work, go purchase a couple really thin needles and a shadow box so you can mount that dude.

After letting it warm up to the point where its joints will move, quickly spread its legs and chelicera (fangs) into the scariest pose possible (using extra needles to manipulate its pose). If you break a leg, or are having trouble getting it to stay in place, use Hard as Nails polish. It will eventually dry out and become stiff. Bingbangbow! you now have a bad ass mounted spider from SE Asia that you can brag about to all the people at your next wine and cheese party.

So, to conclude, New York has been spared an apocalyptic spider attack, and everyone can go home happy. Except for the spider, because she is dead.

Do you have any insect or arachnid-related travel questions? Do you fear that the tiny bugs crawling around the bottom of your Art Basel duffel bug are really mutinous fire ants out to bite our puppies and chew down our trees? Drop us a line at tips@gothamist.com.

#brooklyn
#lou sorkin
#spider
#terror
#original
Do you know the scoop? Comment below or Send us a Tip